There’s nothing like starting the New Year armed with the latest information and insights; so I thought I would share some of Dell’Oro Group’s key predictions for the Wireless LAN market in 2023.

Supply chain acrobatics was the name of the game for Wireless LAN in 2022.  Manufacturers demonstrated some impressive flexibility by redesigning products, expediting components, and paying for air freight in a bid to fulfill their accumulating orders. Just as the lockdowns were underlining the importance of Wi-Fi to the hybrid work model, WLAN equipment became a scarce commodity.

In 2023, the WLAN market will be all about growth. It’s not that the supply constraints have gone away, but they are lessening, and the solutions put in place by the manufacturers are bearing fruit. Meanwhile, enterprises are still clamoring for connectivity.

In this context of accelerating supply meeting backlogged demand, here are a few predictions for the year to come.

Last year, we projected that the WLAN market would break the $10B mark in 2025. However, the last couple of quarters of 2022 showed us how high prices can combine with rising unit volumes to bring record-level revenues. We’ve brought our $10B prediction forward an astonishing two years.

After one of the most prolonged periods of year-over-year price increases, it may seem bold to predict that they will keep rising into 2023. However, there are a couple of unfolding trends backing up this prognosis.

First, prices over the past few quarters have been driven up by the adoption of Wi-Fi 6 (802.11ax) – and there is still room for Wi-Fi 6 to grow. Its adoption curve has been altered by the supply constraints but we are still expecting several more months of gain in share of shipments. 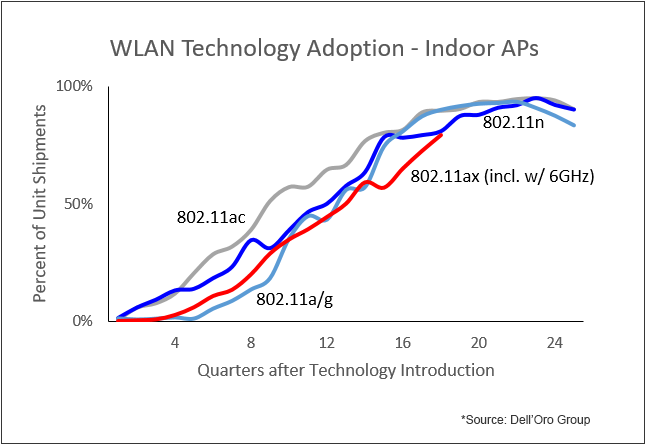 The second trend buoying prices is the rise of manufacturers’ costs, which has been passed on in the form of WLAN price increases. With a backlog worth two quarters of revenues for most manufacturers outside China, it takes at least six months for the higher-priced WLAN orders to flow through to delivery. This means a boost to manufacturers’ revenues in the first half of 2023. Eventually, the basic laws of economics will prevail and price erosion will kick in.  We are predicting that prices will peak and start to come down in the second half of the year.

History tells us that the Enterprise Class Wireless LAN market is back-end loaded. That is, the majority of units are shipped in the second half of the year.  But 2023 will be a year like no other. The industry’s unprecedented backlogs are coinciding with a period of slowing economic growth.

In 2023, we predict that the market won’t follow its usual seasonality, and half of the year’s units will be shipped in the first two quarters of the year – six points above the five-year average.

3) The WLAN industry will gain clarity around Campus Network As A Service offers, and the NaaS business model will be put to the test

The term “Network As A Service” was bandied around quite a bit in the context of Campus IT services in 2022, although the industry lacks a common definition for the term.

On one hand, we saw new companies, like Meter, Nile, and Shasta promising to change the way enterprises consume Wireless LAN, building their brand on both technological and pricing innovation. The latter involves moving Wireless LAN from an upfront purchase to a recurring monthly expense, often based on a simplified metric, such as office area or number of employees – a metric that is more intuitive than the number of access points or switches.

On the other hand, we heard incumbent HPE Aruba announce some mega-NaaS deals, with large retailers and educational institutions. These companies bought the As A Service offer in part because it included “Day-2 Operations”; that is, professional services such as network design, monitoring, and troubleshooting. This definition of NaaS is similar to Managed Wi-Fi offerings already being delivered by service providers and systems integrators.

As we peel the onion of the different Campus NaaS offers, we find important dimensions such as consumption-based pricing; a mix of self-managed, co-managed, or fully-managed equipment; value-added network services, service-level guarantees; evergreen technology offers;  and AI-enhanced operations.

Which market segments will be attracted to which definition of Campus NaaS? How will the service impact manufacturers’ revenues?  We will start to get some answers in 2023, and Dell’Oro Group will be front and center in defining and sizing the opportunity.

What’s next for Enterprise Class Wireless LAN market spending in 2023?