After attending Huawei’s 2021 virtual analyst summit, I started to wonder whether my forecast for E-band shipments was wrong.

Over the past decade, E-band has been steadily growing out of its early-era use as a technology for simple Ethernet bridges on a campus into the wider and more sophisticated world of mobile backhaul. In our market study at Dell’Oro Group, we estimate that E-band radio shipments that took place over a decade ago were used solely for enterprise campus interconnects, but now, about 80 percent of new E-band radios are purchased with the intent to use it for mobile backhaul. Of course, this change was not a coincidence; it was very much driven by the rising level of mobile broadband speeds enabled with 4G mobile radios that increased the requirements for mobile backhaul capacity.

Furthermore, because of the increasing capacity requirements, operators needed a better solution for when fiber was not available. So for wireless backhaul, the question was whether to continue using traditional microwave bands that are designed for up to 500 Mbps of link capacity or future proof with E-band designed for 20 Gbps links (using XPIC). In many cases, the decision seemed to favor future-proofing with E-band, especially in regions where spectrum license fees for E-band was low. Looking back five years, while the shipment volume of traditional microwave systems declined at an average annual rate of 5 percent, the shipment volume of E-band radios increased at an annual rate of 24 percent (Figure 1).

I do not think this trend will stop here. Rather, I think it will only grow as 5G mobile radio installations continue and backhaul capacity requirements increase further. There have already been very successful deployments of E-band radios for 5G backhaul in places like Saudi Arabia by major operators Saudi Telecom Company and Zain, strengthening the applicability of E-band technology for 5G backhaul. Hence in the January 2021 Microwave Transmission Five-Year forecast report, we projected E-Band radio shipments to grow at a 27 percent compounded annual growth rate (CAGR) and comprise nearly 30 percent of all microwave point-to-point radio shipments by 2025 (Figure 2). But can it be higher? 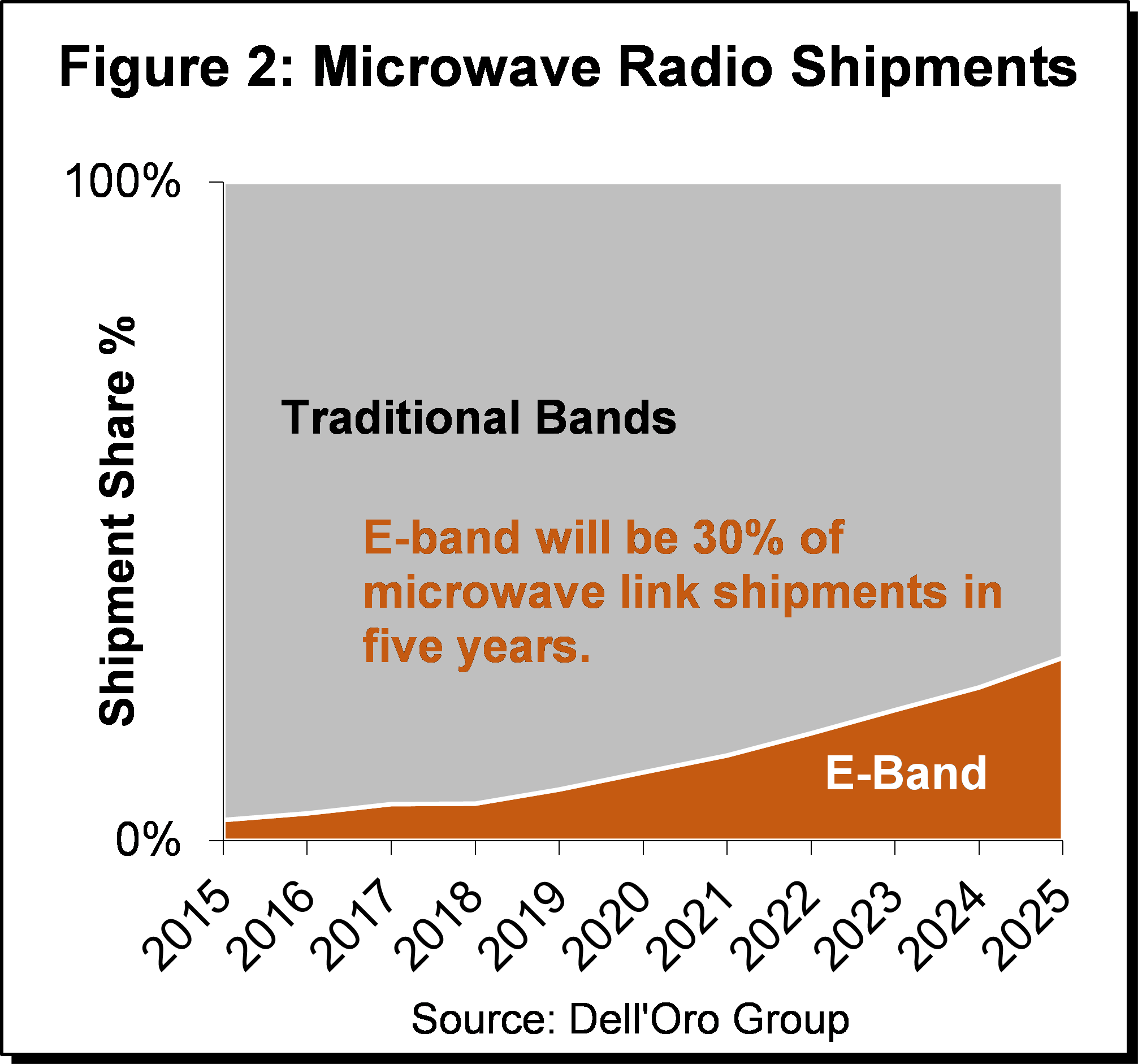 In developing the five-year forecast, I already considered that 5G will require a much higher backhaul capacity that will favor a single E-band radio over multiple bands of traditional microwave links, especially when considering the cost of equipment, spectrum license fees, and operational expenses such as tower lease and power. I even, to a degree, accounted for smaller antennas that will benefit its use in urban areas, empowering operators to install E-band radios in a smaller form factor that can be closer to street level thereby easing the use of wireless backhaul for cell site densification initiatives. However, I always considered E-Band to be limited by a couple of its technical features (restrictions): span lengths below 2 kilometers and higher rain fade. So, what happens if these two features that are inherent in E-band radios can be overcome?

“How many more cell sites can use E-band radios if span lengths are increased to 5 kilometers or if E-band link availability can be increased in geographic areas with high rain fall?”

Those were some of the questions floating through my mind as Huawei presented a longer reach E-band solution that included a higher power E-band radio and larger active antenna with intelligent beam tracking (IBT) technology to ensure site-to-site alignment. (Note: one issue with a very small beam angle and longer span is that the microwave radio alignment can be easily disturbed by high winds and temperature if the microwave radio is not mounted on a very stable structure. Hence, active alignment widens the mounting options and number of deployable sites). Also, another dimension that adds to the greater usability of E-band is that with better radio performance, the link availability can be increased in short spans. Therefore, E-Band radios that were often not used when link spans exceeded 2 kilometers or when locations had historically high rain fall can now be considered.

While I have always had a positive outlook for E-band, claiming it to be the highest growth segment in the point-to-point Microwave Transmission market for many years to come, it is nearly impossible for me to not increase my optimism for this market when we consider the recent technology innovations that reinforce the future of E-band and further expand its market applicability:

In summary, E-band systems have come a long way from only providing short building-to-building links on a campus as the technology matured. As such, E-band has already proven it can meet the higher capacity and lower latency requirements of 5G mobile radios, and we believe the opportunity for E-band will only go in one direction from here—up and to the right—with new technologies that improve its reach and performance.