Huawei recently held its annual analyst event. Even though we were not able to attend in person, it was an informative event. Below we will discuss some of the RAN-related takeaways touching on 6 GHz and general FDD trends.

Current sub 6 GHz 5G NR deployments utilizing both the FDD bands and the upper mid-band will go a long way in addressing continued data traffic growth. At the same time, the upside is limited and will likely not be enough to meet the capacity demands of the next decade, and as a result, both suppliers and operators are assessing their capacity roadmaps. Operators have three basic tools at their disposal to manage traffic growth including leveraging more efficient technologies, deploying more cells, and using more spectrum. So in addition to increasing the reliance on small cells, operators will from a licensed spectrum perspective have three high-level options once the upper mid-band has been exhausted including maximizing efficiency with the FDD spectrum (using 8T8R and/or Massive MIMO), deploying millimeter wave (mmWave) systems, and using the upcoming 6 GHz spectrum.

Given the lack of tools in the toolkit and the overlap on the demand side, operators and regulators typically converge towards similar approaches when it comes to balancing ROI and spectral efficiency. It is not a coincidence that operators increasingly rely on 4T4R radios to build the LTE base layer with FDD networks or that 64T64R became the de-facto configuration for operators with larger swaths of upper mid-band assets.

Yet for some reason, there is not much consensus when it comes to optimizing the use of the 6 GHz spectrum (5.925-7.125 GHz). China appears to favor licensed 5G for the entire 6 GHz spectrum, while the FCC and MSIT have made the decision to make the entire 1200 MHz of spectrum in the 6 GHz available for unlicensed use. Other countries/regions and the GSMA are considering a more balanced approach between the unlicensed and licensed spectrum, allocating possibly up to half or 600 MHz for licensed use. According to a GSMA survey, 90% of MNO’s responses placed the 6425-7125 MHz as a high priority for IMT. 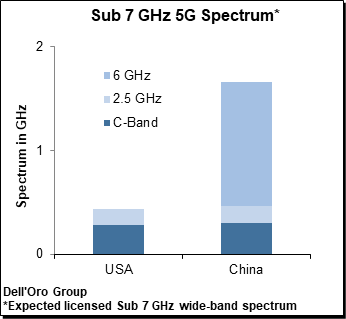 To be fair, it is not trivial. On the one hand, Wi-Fi is a major success story and it remains the de-facto indoor connectivity technology for enterprises and consumers. And the unlicensed spectrum is increasingly congested. Meanwhile, mobile data traffic continues to grow at an unabated pace and there are few signs that traffic growth will slow enough to obviate the need for a more valuable spectrum.

Huawei is a strong proponent of using a more balanced approach with the 6 GHz spectrum. And during HAS2021, Huawei shared some preliminary and rather insightful findings from early tests that could prove to be extremely valuable for other countries that have not finalized their 6 GHz plans.

Huawei estimates that the 6 GHz spectrum could deliver 10x of incremental capacity relative to the C-band with similar coverage using higher-order MIMO and more antenna arrays. In other words, preliminary findings suggest technology advancements can compensate for the 9 dB delta between 3.5 and 6 GHz and ultimately enable operators to reuse a significant portion of the existing macro grid without compromising coverage.

And it is more than a PowerPoint. Initial tests using 5 macro sites in Hangzhou support the premise that the 6 GHz spectrum can achieve similar coverage as the C-band. Huawei has been working on prototypes and 6 GHz trials will be conducted in China during 1H21 to verify coverage, capacity, and coexistence interference. Field tests for the 6425-7125 MHz spectrum will also be conducted in Russia during 2H21.

These developments could turn out to be a game-changer not just for the operators but also for the suppliers because it would create another major macro 5G wave with potentially millions of advanced Massive MIMO systems deployed after the 64T64R and 32T32R upper mid-band rollout phase.

The initial 6 GHz Massive MIMO prototype is fairly large now, however, Huawei remains optimistic that the form factor will improve. Keeping in mind that Huawei and Ericsson now offer TDD Massive MIMO products in the 20 kg range, down from ~40 kg in just a few years, we don’t have too many reasons to doubt this assumption. Commercial products and deployments could be a reality by the 2023-2025 time frame, aligned with the WRC-23 6 GHz IMT identification.

In other words, the technology progress remains on track. Unfortunately, there is still some risk that the decisions made by some countries to allocate all of the 6 GHz spectrum for unlicensed use could impact the momentum and the ecosystem. More countries will finalize their 6 GHz plans in 2021. Hopefully, these preliminary findings will help regulators make data-driven decisions and ultimately optimize the use of the 6 GHz spectrum for both outdoor and indoor environments.

In addition to the potential upside with the upper mid-band and the 6 GHz spectrum, operators will continue to improve the efficiency with the FDD spectrum. Upgrading the sub 1 GHz sites to 4T4R will help to improve the experience by ~80%. Furthermore, Huawei estimates operators can squeeze another ~1.7x of capacity by upgrading the 2 GHz base layer from 4T4R to 8T8R. This combined with FDD Massive MIMO (~3x to 5x relative to 2T2R) will provide the carriers with a solid near-term and long-term FDD capacity roadmap for the sub 1 GHz and 2 GHz spectrum.

Huawei’s FDD portfolio and roadmap align well with its vision for this spectrum. It is also consistent with our projections. We still believe it is unlikely that FDD Massive MIMO will become the base layer and instead anticipate these will be deployed in hotspots along with an upgraded base layer. Though of course, it is worth reminding everyone that the consensus three to four years ago was that TDD Massive MIMO would only make sense in hotspots.

In short, some of the keys RAN takeaways from Huawei’s 2021 HAS event are consistent with the message that we have communicated for some time, namely that the overall 5G RAN capex cycle will be longer and steeper than the 4G cycle, underpinned by multiple asynchronous 5G waves including: (1) sub 1 GHz NR; (2) upper mid-band Massive MIMO; (3) 2 GHz 4T4R; (4) 8T8R and FDD Massive MIMO; (5) 6 GHz NR; and (6) mmWave.