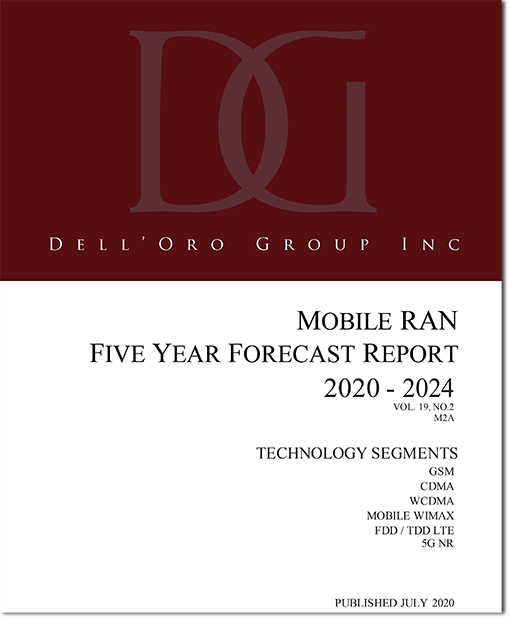 The global upswing that began in the second half of 2018 has become deeper and stronger. Even with the higher-than-usual degree of uncertainty around the economy, we forecast that the RAN market will grow at a healthy pace over the next three years, before growth tapers off in the outer part of the forecast period, resulting in a mid-single digit CAGR between 2018 and 2022. Cumulative investments over the 2019 to 2024 period are expected to eclipse $200 B.

The main growth drivers have not changed. They include:

(3) The shift from passive to advanced antenna systems, which will shift capex from the antenna to the RAN market.

The expected impact of these growth drivers has changed. Cumulative revenue projections for the 2019 to 2024 period have been adjusted upward, reflecting more upbeat expectations in China and North America. This in combination with a more favorable outlook for FWA is expected to outweigh downward risks associated with COVID-19 and a pickup in Open RAN—we have adjusted the Open RAN projections upward, with Open RAN now approaching a double-digit share of the overall RAN capex by the outer part of the forecast period. Within the technology mix, cumulative 5G NR RAN revenues for the 2019 to 2024 period have been revised upward while the equivalent LTE capex has been adjusted downward.

Our forecast that 5G NR will be deployed at a faster pace than LTE and surpass LTE in 2021 hinges on a set of key assumptions, including:

(2) 5G mid-band spectrum will be available sooner than LTE spectrum was made available in the 3G to 4G transition;

(3) New dynamic spectrum sharing technologies will simplify and accelerate the migration from LTE to 5G NR;

(4) Initially 5G will be just another G, but long-term it will be more than another G, even if it takes time to reach the full potential of 5G;

(5) Complete 5G systems to address new use cases will be deployed gradually, at a slower pace than Sub 6 GHz MBB 5G NR.

Regional projections have been adjusted to reflect some COVID-19 related near-term slowdown in late majority MBB regions, including Europe, Latin America, parts of Asia Pacific (APAC), and parts of Middle East & Africa (MEA). While the CAGR is fairly flat in most regions, the capex envelope within the forecast period is expected to vary across the regions.

Risks are broadly balanced. The geopolitical uncertainty could trigger more government stimulus than we have currently considered to support network swaps and other forms of tax policies to improve the staying power of non-Chinese vendors.

Taking into consideration that significant changes in GDP resulted in material RAN changes with a roughly one-year lag in the 2001 and 2008 recessions, and that we are modeling 2021 to be a growth year, the baseline projections rest on the assumption that there will be some downward push over the short-term in the less advanced MBB markets. At the same time, we anticipate the upside driven by the 5G rollouts in the advanced markets will ultimately outweigh the downward adjustments, implying that the extent of the projected growth will appear disconnected from the underlying economy.

Other takeaways from the July 5-Year RAN Forecast include: