Dell’Oro Group published an update to its Data Center switch market five-year forecast report. The report shows that the data center switch market is expected to grow at a 4% CAGR from 2019 to 2024, approaching $17 B by the end of our forecast period. Despite the COVID-19 pandemic, our revised forecast of 4% CAGR shows only a slight downward adjustment from our prior January forecast of 5%. 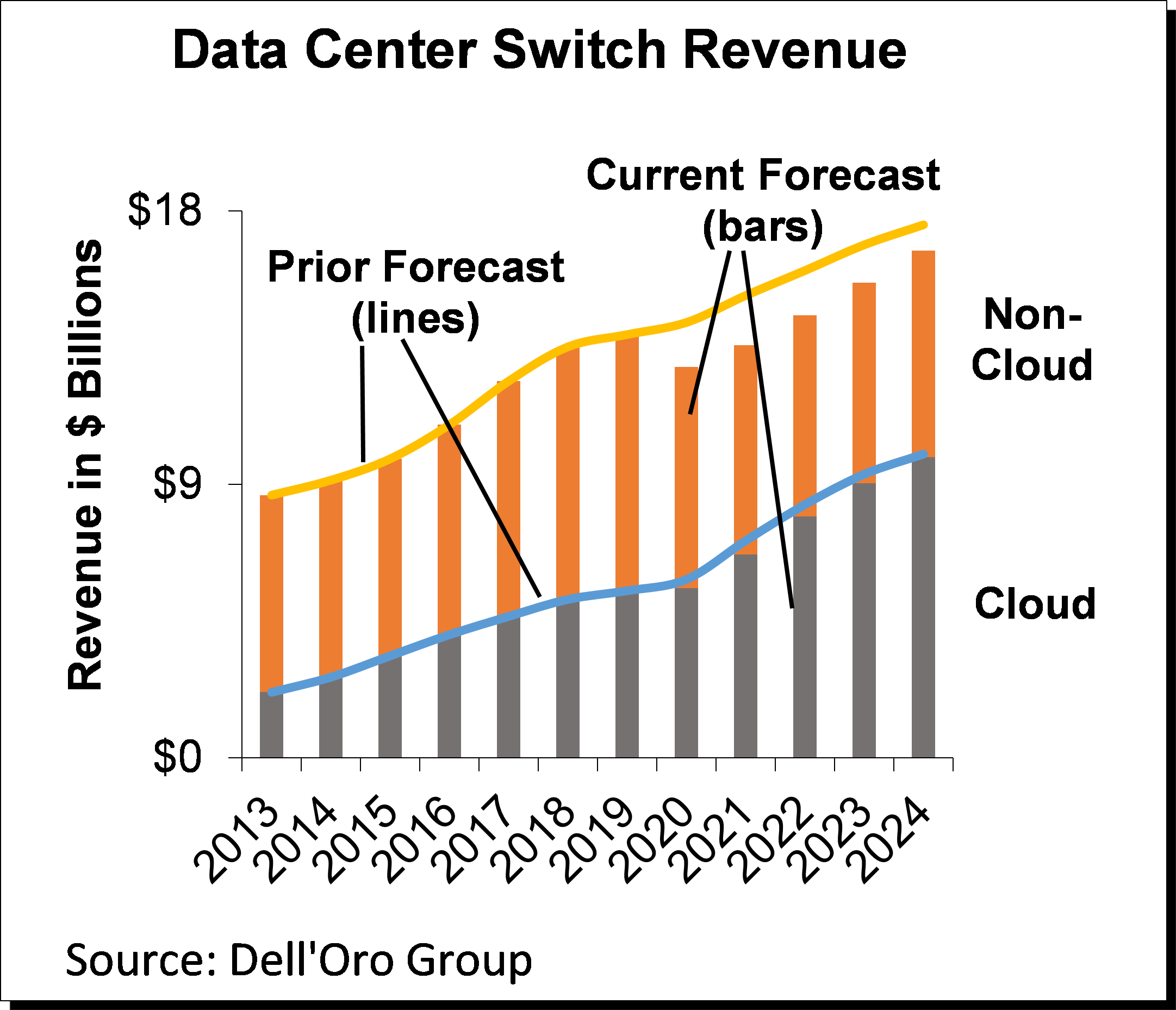 Most of the downward adjustment was driven by the non-Cloud segment, which includes enterprises as well as Telco Service Providers (SPs). The non-Cloud segment comprises about 60% of the total data center switch revenue and accounted for more than 70% of the downward adjustment for every year during our forecast period. In the meantime, our current forecast for the Cloud segment shows only a slight downward revision, relative to our prior January report  as shown in the chart. Our Cloud segment includes the Top 4 U.S Cloud SPs (Google, Amazon, Microsoft, and Facebook), The Top 3 Chinese Cloud SPs (Alibaba, Tencent and Baidu), and other Tier 2/3 Cloud SPs that are mostly Content Cloud providers.

Within the non-Cloud segment, we have lowered our forecast for large enterprises, as well as for small and medium enterprises. However, while we project the “Large Enterprise” segment (which includes Fortune 2000 companies) to return to growth and surpass its 2019 pre-COVID revenue level in 2021, we predict that small and medium enterprises will continue to decline during our forecast period—never to return to growth, for reasons explained in more details in our Ethernet Data Center Switch Five-Year Forecast Report.

Within the Cloud segment, we essentially maintained our projections for the Top 4 U.S. Cloud SPs, as well as the Top 3 Chinese Cloud SPs, as our underlying assumptions for the growth in those segments have remained unchanged. These assumptions are mostly driven by the timing of the 200/400 Gbps adoption as well as the consumption/digestion cycles. However, we have lowered our forecast for the “Rest of Cloud” segment, as macroeconomic headwinds may affect the ability of these Tier 2/3 Cloud SPs to grow revenue, consequently impacting their ability to expand their data center infrastructure to support their business. We believe that some of these Tier 2/3 Cloud SPs may rely on Tier 1 Public Cloud providers to expand capacity during and after the pandemic. Leveraging Public Cloud SPs is an opex alternative that allows them to scale up and down capacity according to the demand.

Other highlights from the report

If you need to access the full report to obtain revenue, units, pricing, relevant details including speeds, regions, market segments, etc., please contact us at dgsales@delloro.com