The Rise of Massive MIMO

With the Massive MIMO RAN market recording a third straight year of growth in 2021 and a second consecutive quarter of year-over-year (YoY) revenue declines in 1Q22, the timing is right to review the Massive MIMO market and future growth prospects.

For a technology that was initially viewed as being mostly a fit for high-traffic locations, Massive MIMO has come a long way in just a few years, ramping at a much faster pace than initially expected. Preliminary readings suggest global Massive MIMO RAN revenues, which include baseband and radio revenues for large-scale antenna systems featuring > 8T8R sub-6 GHz LTE and NR radio configurations, increased roughly 20-fold between 2018 and 2021, propelling total Massive MIMO revenues to reach new record levels. 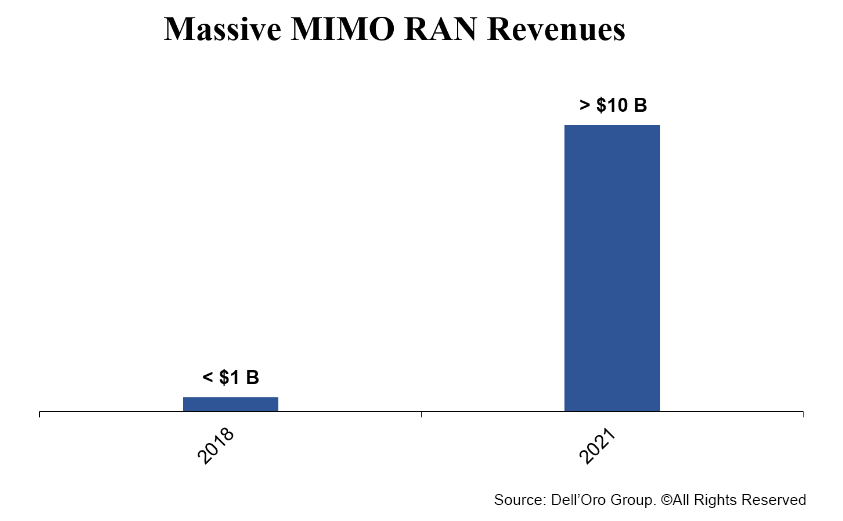 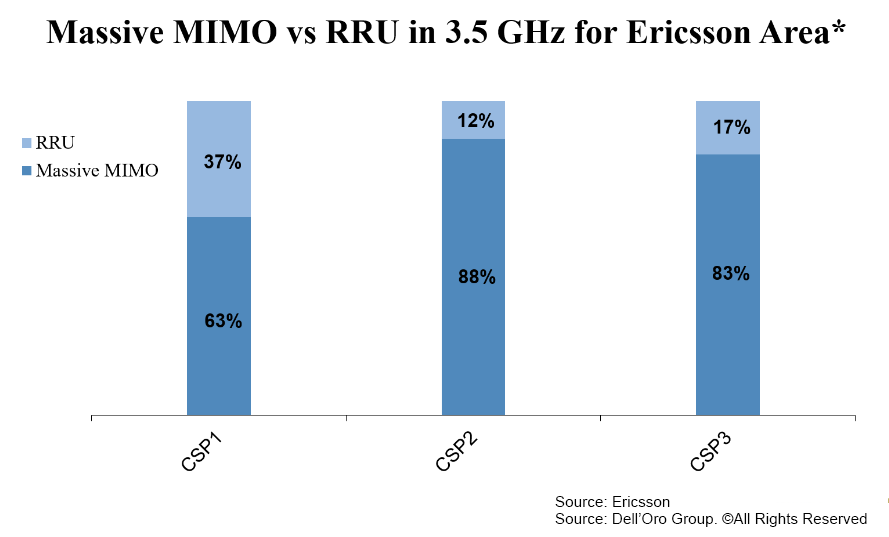 In addition, operators have for the most part been able to leverage their existing macro grids and minimize the time required for network construction, which generally follow a similar pattern with operators addressing high traffic areas first before transitioning towards less dense populations. Larger countries can realize nationwide coverage in around ~3 years while smaller countries are able to upgrade the first base layer in 1 to 2 years.

Although Massive MIMO requirements and performance will vary depending on a confluence of factors including the inter site distance (ISD), traffic characteristics, and vertical user spread, operators have so far been favoring the capacity, coverage, and performance benefits of the 64T64R configuration. One of the Korean operators is reporting performance and capacity gains in the order of 30% after upgrading its Huawei radios from 32T32R to 64T64R. And with RAN still accounting for 10% to 15% of the overall site opex and wireless capex, the price premium with the 64T64R is justified in most scenarios with ISDs of 500m or less.

As the ISDs are increased, the relative gains slow – According to Ericsson, the relative cell-edge throughput gains with 64T64R vs. 32T32R are in the single digits as the ISD approaches 750m, boosting the business case for the 32T32R configuration.

Regional adoption has been fairly broad based, driven by synchronized upper mid-band rollouts in especially the Asia Pacific region. Wide-band 5G deployments are now ramping up in Europe and North America.

Massive MIMO revenue growth did slow in 2021 and the market declined YoY for a second consecutive quarter in 1Q22, in part because of the state of wide-band 5G in China and South Korea. Looking forward, Massive MIMO investments are expected to remain elevated, however global growth is projected to soften as output acceleration in Europe, North America, and parts of APAC will be offset by more challenging comparisons in some of the advanced markets.

At the same time, wide-band R&D is a priority and the products are evolving rapidly with incremental advances improving the form factor, weight, performance, cost, and price. The 64T64R AAU sizes continue to shrink, with leading vendors now offering 64T64R radios weighing just 17 kg to 20 kg, down from the 40 kg+ range just a few years ago. And both Ericsson and Huawei are now offering 32T32R AAUs weighing 12 kg and 10 kg, respectively, ideal for footprint optimized capacity. Nokia is offering a 400 MHz BW 32T32R AAU weighing 17 kg.

Continuous product improvements are expected to shorten the lifespan relative to the standard RRU products – some operators are already swapping out Massive MIMO radios deployed just two years ago for newer more efficient and higher-performing radios.

So in addition to upper mid-band footprint expansion with slower to adopt 5G markets, the potential swap opportunity to accommodate new more compact, efficient, and higher bandwidth products will play a crucial role.

In short, operators and enterprises have multiple 5G tools in the toolkit, including sub-1 GHz, 2 GHz, upper mid-band, 6 GHz, and mmWave. And while all of the spectrum will eventually become 5G spectrum, the upper mid-band is clearly a priority in this initial MBB phase.

Following a couple of years of exponential increases, global Massive MIMO revenue growth is expected to moderate going forward. Still, Massive MIMO investments will continue to advance at a faster pace than non-Massive MIMO as operators increasingly turn to the technology to reduce the TCO per capacity.