Today, Ciena announced the acquisition of Tibit Communications and Benu Networks in an effort to control its own destiny in the expanding XGS-PON market and to expand on relationships the company already has with major tier 1 telcos and cable operators for switching, routing, and optical transport.

The company is expecting more significant wins for its platforms, as well as a continued revenue stream from Tibit’s existing supplier relationships—the most notable of which is Harmonic, which uses the Tibit MicroPlugs in its Jetty remote switch module. It will certainly be interesting to see how these two system vendors—now competitors—will manage the relationship going forward, especially when competing for cable operator business—more on that later.

Clearly, the opportunity for Ciena to grow its presence in the broadband access space is now. As we have pointed out, the ongoing levels of both public and private investment in FTTH networks in the North American market remain at historic levels. Total spending by service providers on PON equipment in the region has grown from $774M in 2019 to an expected $1.9B in 2022. The technology with the biggest growth trajectory is clearly XGS-PON. Between 2019 and, XGS-PON OLT port shipments have increased 2231%, jumping from 32k in 2019 to an expected 748k in 2022. It’s likely the numbers in 2022 would be even higher were it not for the lingering supply chain issues that have resulted in considerable vendor backlogs. 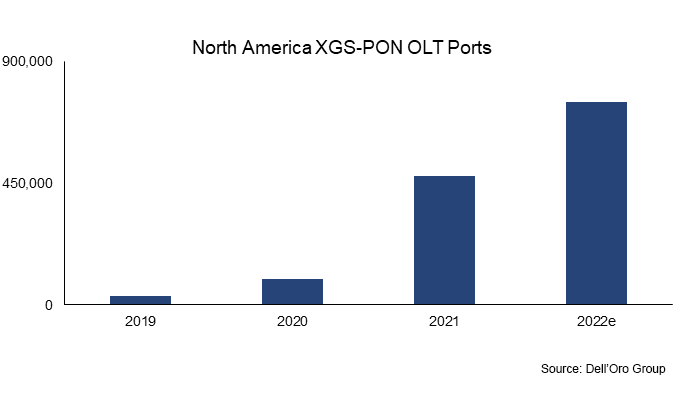 With the current investment cycle in XGS-PON, the focus on speed and the need to stay ahead of competitors will likely result in an accelerated adoption of new PON technologies in North America, including 25Gbps and 100Gbps PON. It might seem crazy to think that service providers would move so quickly from a shared subscriber capacity of 10Gbps per OLT port. But if providers are already pushing 5Gbps and 8Gbps tiers, they are going to quickly exhaust their XGS-PON capacity, even with oversubscription. Tibit just happens to be a founding member of the 25GS-PON MSA and, earlier this year, accelerated its efforts to build a 25 Gbps-PON ASIC.

Even if service providers’ own fiber investments slow in the next year, as some have speculated, there is no slowing the stimulus efforts of both the federal and state governments. Those contract decisions will be made throughout 2023 with deployments beginning later in the year and through the end of the decade. So, while Ciena works through the lengthy lab cycles at the larger tier 1 operators, it can also address the smaller tier 2 and tier 3 operators who will need to deploy in a shorter time frame to secure their funding.

The combination of Tibit and Benu allows Ciena to address smaller operators with a solution that incorporates both access and aggregation in a single platform, with a hardware-abstracted OLT coupled with a vBNG (from Benu) that can more efficiently address localized areas with smaller subscriber counts. Unlike a traditional deployment in which a local PoP would be set up with a separate OLT, switches, and routers, all homed back to a BNG located in a central office, smaller operators could deploy a Ciena 51xx platform that combines the OLT and switching/routing functions, with a vBNG software stack running in the shared data center. This architecture could speed up the deployment of new fiber services in rural and underserved areas and allow service providers pursuing “edge out” strategies to deploy and connect back to their existing transport networks in a shorter amount of time with less fiber.

Ciena will face solid competition in tier 2 and 3 markets from well-established players, including Adtran, Calix, DZS, and Nokia. All of these vendors understands the value that the combination of access and aggregation brings to smaller operators who are often resource-constrained. It’s a big reason why Adtran acquired Adva and DZS acquired Optelian. Ciena is flipping that model by complementing and expanding its routing, switching, and optical prowess with broadband access platforms. No matter the approach, combining access and aggregation, whether from a single vendor in multiple platforms or in a collapsed platform, is how a growing number of service providers are architecting their broadband access networks. From Verizon to AT&T to dozens of other telcos, collapsing access and aggregation networks onto fiber with Ethernet transport is the logical evolution of their networks. It reduces the total number of network elements and reduces operational costs.

Earlier, we mentioned the fact that Ciena is not Tibit’s lone customer. Harmonic is also a fast-growing customer of the Tibit MicroPlugs, pairing them with its CableOS platform for BNG, routing, and DOCSIS provisioning functions. Though we don’t expect to see any changes in the business relationship between Ciena and Harmonic in the short term, they may find themselves competing with each other for some marquee cable customers. In fact, they might already be doing so.

With cable operators in North America and Europe facing significant competition from fiber overbuilders, the pressure is on for them to expand their own fiber footprint, extending beyond new builds to overbuild scenarios. For a growing list of smaller cable operators in North America, that has certainly been their strategy and will continue to be, as DOCSIS 3.1 will likely be the last HFC technology they ever use.

Even tier 1 operators in Europe, including Liberty Global and Vodafone, have already begun significant fiber overbuilds. The net result is a steady and significant growth in the number of remote OLT ports shipped—particularly in North America, where edge-out strategies and retrofitting existing node locations is a quick way to expand fiber footprint. 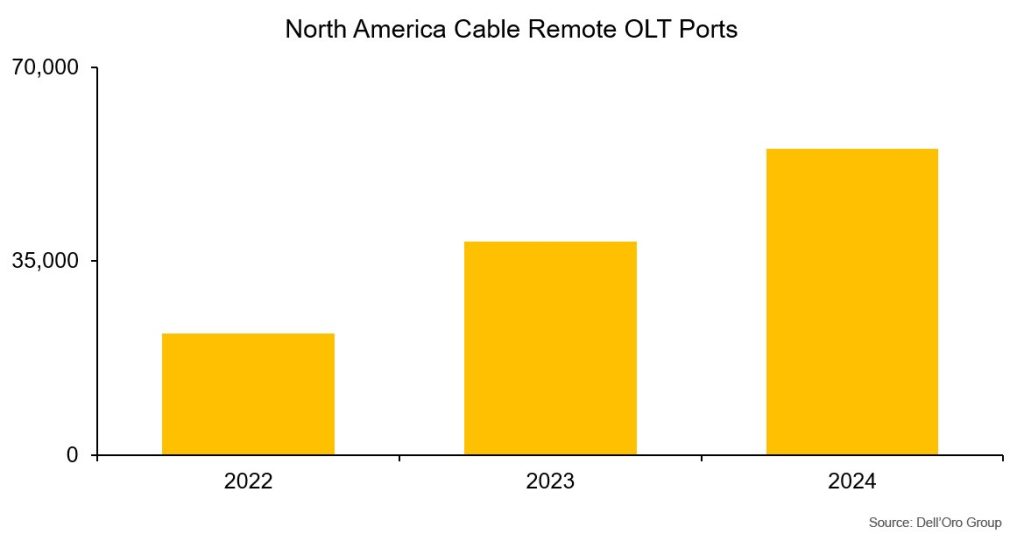 But even among the North American tier 1 operators, who have made public commitments to DOCSIS 4.0, there is an acknowledgment that FTTH deployments have been made far easier architecturally partially because of the Tibit MicroPlug. Even though there are differences among the largest multiple-systems operators (MSOs) regarding specific technical approaches to DOCSIS 4.0 and their access networks, in general, there is consensus that distributed access architectures are the future. The HFC-based architectural options of DAA are Remote PHY and Remote MACPHY. For fiber, however, we classify Remote OLTs as just another flavor of DAA. R-OLTs, especially based on the Tibit architecture, essentially function like R-MACPHY. With a BNG and some type of DOCSIS translation engine, MSOs can provision their fiber subscribers just like they would their DOCSIS subscribers.

In those scenarios, Harmonic has a clear edge, having a vCMTS platform that can work with both Remote PHY Devices (RPDs) in DOCSIS deployments and also R-OLTs in FTTH deployments.

But for cable operators who are moving away from DOCSIS provisioning and fully embracing fiber, the need for a vCMTS isn’t as strong. So, that opens the door for companies like Ciena, as well as Calix, Adtran, Vecima, DZS, and others.

The more interesting scenario in the cable world, and the one with the most upside for Ciena, is the one where a vCMTS platform is already in place and the remote OLT platform remains an open competition. In that case, there are large MSOs who value an R-OLT that combines access and aggregation to dramatically simplify their CIN (Converged Interconnect Network). A remote platform that can function as both an OLT but also as a router for other nodes in the network collapses multiple network layers and simplifies transport back to the headend.

Though the biggest opportunities still rest with the tier 1 telcos, there is enough upside among both smaller telcos and cable operators to make these acquisitions pay off for Ciena both in the short- and long-term. The transactions send a further signal that the distribution of access network and subscriber management elements along with the abstraction of OLT hardware remain strategic initiatives for many operators.