The analysis contained in these reports suggests the collective global share of the leading suppliers remained relatively stable between 2020 and 1Q21, with the top seven vendors comprising around ~80% of the total market. Not surprisingly, Huawei maintained its leading position. However, the gap between Nokia and Ericsson, which was around 5 percentage points back in 2015, continued to shrink and was essentially eliminated in the quarter. In addition, Samsung passed Ciena in the quarter to become the #6 supplier.

Excluding North America, we estimate Huawei’s revenue share was about 36% in the quarter, nearly the same as the combined share of Nokia, Ericsson, and ZTE. 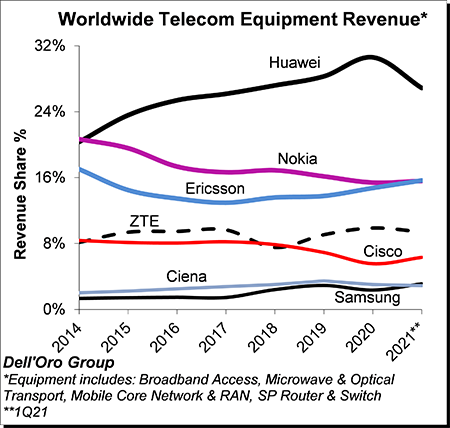 Additional key takeaways from the 1Q21 reporting period include: