Prediction: 5G NR continues to accelerate at an extraordinary pace, much faster than expected four or five years ago or even just six or three months ago, underpinned by large-scale deployments in China, Korea, and the US. These trends are expected to extend into 2020. The upside in 5G NR will be more than enough to offset declining LTE investments, propelling the overall RAN (2G-5G) market for a third consecutive year of healthy growth.

Status: This is for the most part playing out as we outlined, though we have adjusted the 5G NR and Core outlook upward to reflect larger than expected deployments in particularly China, which is more than enough to offset LTE capex on pace to decline more than 20% in 2020. 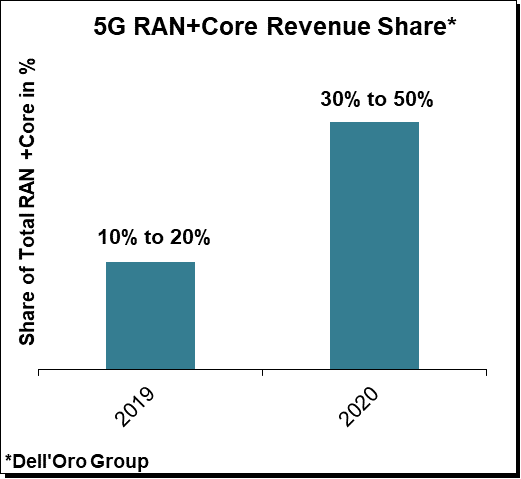 Prediction: The path toward 5G has become more straightforward since the 2Q19 quarter with only two options now—Option 3 which is 5G NSA, utilizing the EPC, and Option 2 which is 5G SA utilizing the 5G Core. As we move into 2020, we will see the emergence of the first 5G Standalone (5G SA) networks. We expect service providers in China, Korea, the Middle East, and the US to launch 5G SA sometime in 2020.

Status: 5G SA and 5G core is now a reality. According to the 2Q20 MCN report, 5G Core revenues accounted for nearly 15% of overall Mobile Core Network Revenues, underpinned by strong developments in the APAC region. “The ramp-up in the second half of 2020 has already begun, with T-Mobile commercially launching its 5G Standalone network in August, recognizing Cisco and Nokia, as their 5GC suppliers,” said Dave Bolan, Dell’Oro 5G Core, and MEC Expert.

Prediction: The Massive MIMO business case has changed rather significantly over the past two to three years with the technology now considered to be a foundational building block for mid-band NR deployments. We recently revised the 2020 Massive MIMO outlook upward, driven by surging year-to-date shipments and improved market sentiment for 2020. The overall 5G NR transceiver installed base – Massive MIMO plus Non-Massive MIMO for sub 6 GHz and Millimeter (mmW) macros and small cells – is projected to eclipse 0.1 B by 2020.

Prediction: The attitude towards spectrum sharing is on the upswing, with both suppliers and operators discussing their spectrum sharing roadmaps. In addition to the spectral efficiency gains of 15% to 20%, operators are considering the benefits from a marketing perspective. Operators also see the extended 5G NR coverage with a lower band spectrum as a key enabler for 5G SA and network slicing. The technology is expected to play a pivotal role in upgrading existing low-band LTE sites to NR in the year 2020.

Status: Operators are clearly warming up to the idea that the upside with DSS outweighs the downside, with the key benefits including 1) Accelerate nationwide coverage, 2) Spectral efficiency upside comparing NR and LTE, 3) Overall performance upside using CA, and 4) Simplify and accelerate the transition towards 5G SA.

The downside with DSS is that it can impact the net capacity. But at the same time, operators also know that there are only three paths to move from 4G to 5G with the existing LTE spectrum — re-farming, static sharing, and DSS. And unless the goal is to stay on LTE, the reality is that the picture becomes more favorable when comparing DSS with static sharing. According to Ericsson, the relative performance upside with both the LTE and 5G NR traffic when comparing DSS with static sharing at various subscriber penetration rates is material (for a 50% NR penetration, Ericsson estimates the LTE and NR upside could be around 86% and 57%, respectively).

And more importantly, operators are shifting from talking about DSS to deploying the technology. Swisscom and Verizon have already deployed DSS nearly nationwide. AT&T is also using DSS to expand its low-band coverage. Deutsche Telekom said with its 2Q20 update that its low-band 5G network will cover two-thirds of the German population by the end of 2020, relying heavily on DSS.

Ericsson said earlier in the year that 80% of customers that are testing DSS have plans to deploy the technology over the next year.

Prediction: With more data points suggesting the beamforming gains with Massive MIMO radios delivering comparable outdoor coverage in the C-band relative to 2 GHz LTE deployments, preliminary data from the field also suggests indoor performance will be a challenge and operators are already migrating the indoor capex from 4G to 5G. These trends are expected to intensify in 2020.

Status: We have not made any material changes to the overall outlook and still expect full-year 2020 5G NR indoor revenues to surpass LTE pico investments. While shipments were impacted negatively sequentially between 4Q19 and 1Q20, partly due to COVID-19, market conditions improved significantly during 2Q20 propelling the overall 1H20 indoor 5G NR revenues to advance more than 10x year-over-year.

Prediction: Even though deploying 5G NR in the mid-band using the existing macro grid will deliver the best ROI for some time for operators seeking to optimize cost per GB and average speeds, 5G NR mmW shipments and revenues increased substantially in the third quarter of 2019, with the overall mmW NR market trending ahead of expectations. We recently adjusted our near-term mmW outlook upward to take into consideration the state of the market and improved visibility about the underlying fundamentals in the US, Korea, and Japan.

Status: As we discussed in the recently published 5-year RAN Forecast, the outdoor mmW market has surprised on the upside while the indoor mmW market has taken a bit longer to ramp than we initially expected. Even with the recent upward adjustment for the outdoor segment and downward revisions for the indoor mmW forecast, the total mmW market remains on track to surpass 0.1 M units and is expected to account for 5% to 10% of the overall 5G NR small cell installed base by the end of 2020.

Prediction: We remain optimistic about the IoT upside for Industrial IoT/Industry 4.0, reflecting a confluence of factors including 1) Suppliers are reporting healthy traction with the vertical segments, 2) More countries are exploring how to allocate spectrum for verticals, 3) Ecosystem of industrial devices is proliferating rapidly, and 4) New use cases that require cellular QoS are starting to emerge. At the same time, the LTE platform is expected to suffice for the majority of the near-term vertical requirements implying it is unlikely 5G NR IoT-related capex will move above the noise in 2020.

Status: MBB continues to dominate the 5G capex. LTE IoT is picking up the pace and remains on track to comprise a low-single-digit share of the 2020 LTE RAN market. 5G IoT is moving in the right direction with interesting use cases starting to emerge. But it will take some time before the 5G IoT NR capex will move above the noise. At the same time, we adjusted the overall FWA outlook upward with the recently published 5-Year RAN Forecast, reflecting an improved business case and shifting usage patterns triggered by COVID-19. With this adjustment, we currently estimate 5G MBB remains on track to account for more than 97% of the 5G NR market.

Prediction: There are multiple ongoing efforts driven both by operators and suppliers with the primary objective of realizing a more flexible architecture that will optimize TCO for both the known and unknown use cases while at the same time improving the ability for the service providers to differentiate their services. Given the current state of these tracks with the incumbents investing more in virtual solutions and the readiness of Open RAN initiatives for existing 5G MBB deployments, we envision Non-Open RAN Virtual 5G NR revenues will be greater than Open RAN (virtual RAN with open interfaces) 5G NR revenues in 2020.

Status: With Open RAN now developing at a faster pace than initially expected, we might need to revisit this assessment. 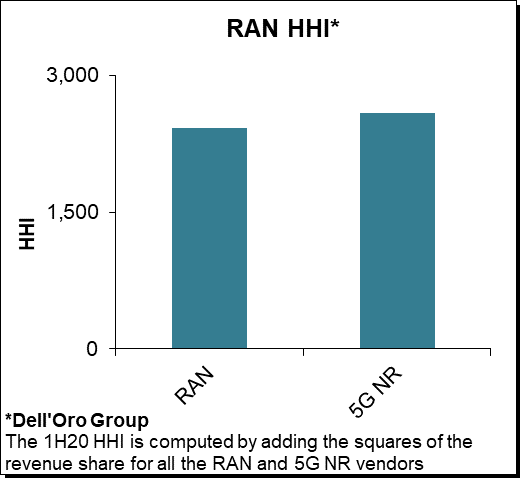 Prediction: Total RAN HHI has been fairly stable over the past three years, reflecting a competitive dynamic that remains fierce, moderately concentrated, and relatively stable. Initial readings suggest the 5G NR HHI for the 4Q18-3Q19 period is trending below the 2018 overall RAN HHI, however, we expect the 5G NR HHI to increase in 2020.

Prediction: Preliminary estimates suggest the shift from LTE to NR is roughly two to three years faster than the 3G to 4G migration from a RAN infrastructure and subscription adoption perspective. The end-user ecosystem is developing at a rapid pace with multiple chipsets, devices, and phones supporting both NSA and SA for the low, mid-, and mmW spectrum now commercially available. While TDD has dominated mid-band and mmW deployments to date, FDD based 5G NR phones became a reality in 2H19 and will proliferate in 2020. End-user device adoption is projected to accelerate rapidly in 2020, with 5G NR approaching 0.2 B subscriptions, bolstered by healthy NR subscriber adoption in China, Korea, and the US.

Status: According to the GSA, 5G subscriptions approached 138 M in the second quarter. It is possible our 2020 forecast is low with total 5G subscriptions not only approaching but even surpassing 0.2 B this year.

For more information about our 5G RAN, Mobile Core Network, Open RAN, and MEC programs, please contact us at dgsales@delloro.com.