5G deployments have come a long way in just a few years, already fueling more than 60% of the global RAN market. Adoption across the various use cases, however, has been mixed, with 3GPP-based Release 15 networks targeting the Mobile Broadband (MBB) usage scenario, supporting more than 95% of the investments to date. This bifurcation between MBB and IoT/Private 5G—together with the fact that some of the more advanced 5G markets are now covering 5G MBB nationwide—is propelling key participants in the ecosystem to prepare for the next phase in the 5G journey. In this blog, we will review 5G-Advanced: what it is, what is required to make it a success, and its implications for the RAN forecast.

The 3GPP roadmap is continuously evolving to fulfill the larger 5G vision. In this initial 5G wave that began in 2018, 3GPP has already completed three major releases:  15, 16, and 17.

The schedule for 3GPP Release 15 included three separate steps: the early drop, focusing on NSA option 3; the main drop, focusing on SA option 2; and the late drop, focusing on completion of 4G to 5G migration architectures. While MBB is dominating the capex mix in this initial 5G phase, the 3GPP roadmap is advancing to address opportunities beyond MBB.

Release 16, also known as Phase 2, was completed in July 2020. The high-level vision is that Release 16 will provide the initial foundation for taking 5G to the next level beyond the MBB phase, targeting broad-based enhancements for 5G V2X, Industrial IoT/URLLC, and NR-U.

These initial releases have been key to the success of both MBB and FWA. But there are still shortcomings that need to be addressed, in order to fulfill the broader 5G vision. The current thinking with Release 18 and beyond (5G-Advanced or 5.5G) is that it will take 5G to the next level, creating a foundation for more demanding applications and a broader set of use cases. Nokia has articulated a vision in which 5G-Advanced helps improve experience, expand capabilities, extend the reach of connectivity, and spur operational enhancements.

Huawei is marketing the 5G-Advanced evolution as 1+1+N or 5.5G, to reflect the additional layer needed to realize ubiquitous Gbps speeds (current 5G is marketed as 1+N, where 1 represents the foundation network and N refers to the various capabilities and scenarios).

As expressed at Huawei’s most recent Huawei Connect 2022 summit, Huawei envisions that 5.5 G represents an important stepping stone toward a more intelligent world, utilizing AI and ML to improve customer experience and to autonomously optimize resources, ultimately reducing cost and energy budgets for the operators. Huawei also sees 5.5G as an important milestone on the path to improving overall capacity before 6G, based on the belief that 5G-Advanced can provide the right framework for delivering ubiquitous Gbit/s performance.

Ericsson also sees 5G-Advanced as an important extension in the 5G journey, envisioning that AI/ML will play an increasingly important role in supporting new applications and use cases.

Current Release 18 priorities may be summarized as follows:

What is needed for 5G-Advanced to become a success?

The majority of the features and enhancements currently outlined with 3GPP Release 18 will deliver incremental performance gains. In order for 5G-Advanced to drive another capex and marketing cycle and ultimately become something more than just another 3GPP release, multiple things need to happen.

For one thing, mobile data traffic consumption needs to increase. According to Ericsson’s mobility report, global mobile data traffic increased 35–40% in 2021 and is projected to advance at a 30% CAGR over the next five years. At these rates of growth, existing sub-6 GHz and Millimeter Wave (mmWave) spectrum allocations will be more than enough to support another 10x of mobile data traffic expansion by 2030. 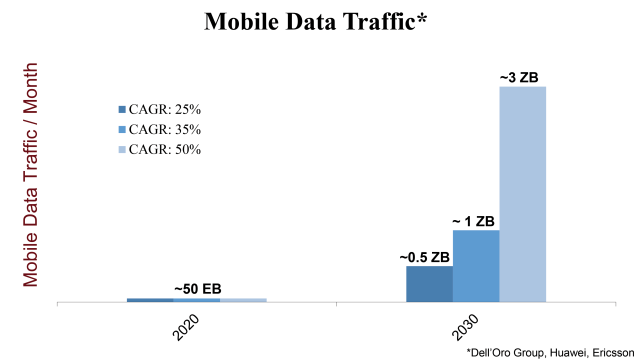 But the same cannot be said if we move to a video-first world with the mobile network. With the typical phone user still spending less than 5% of total smartphone screen time streaming videos on the wireless network, the successful introduction of a new virtual reality (VR) or augmented reality (AR) device for the masses that would trigger a change in behavior—increasing the amount of time users spend consuming video on the mobile network—would from a RAN capacity perspective be a game changer, likely spurring massive capacity investments.

In this case, more spectrum would play a critical role in the broader capacity roadmap. The challenge here is that new near-term sub-6 GHz opportunities are currently confined to the Upper-6 GHz spectrum, which still lacks global coordination as a result of some countries questioning the commercial viability of allocating parts of or the entire 6 GHz band for 5G.

The implication is that the role of the mmWave spectrum will need to change. While mmWave has come a long way in just a few years, the reality is that the sub-6GHz spectrum continues to represent the most economical solution, enabling operators to minimize the need for incremental cell sites. Not surprisingly, mmWave still comprises less than 2% of global RAN investments. Technological breakthroughs combined with repeater improvements and increased use of reflective intelligent surfaces (RIS) will help to shrink the cost per GB gap between the sub-6 GHz spectrum and mmWave, ultimately putting this spectrum to better use.

Since all LTE spectrum will eventually become 5G spectrum, DSS enhancements that can improve the spectral efficiency with 5G during various LTE load conditions should improve the DSS business case, thereby enabling operators to accelerate the shift from 4G to 5G.

Cellular IoT (CIoT), including Broadband and Massive IoT, continues to be successfully deployed across the world. According to the GSA and Ericsson’s Mobility Report, global CIoT connections approached 2B in 2021, up roughly two-fold since 2019. Still, CIoT accounts for a low single-digit share of total mobile data traffic and operator revenues. Although LTE is expected to address the lion’s share of the CIoT connections for the foreseeable future, a stronger focus on Deterministic Networking (DetNet), combined with technological innovation in IoT that can improve uplink rates and location precision, could provide a boost in some industrial settings.

Following a couple years of exponential growth, 5G RAN investments are slowing. At the same time, it is still early in the broader 5G cycle. The message we have communicated for some time still holds: Our baseline scenario rests on the assumption that the 5G cycle will be longer and deeper than the LTE investment phase. And even though the base case is not predicated on the assumption that 5G-Advanced will drive another capex cycle, Release 18 and future releases are expected to play important roles in this next part of the 5G journey.

The RAN is just one piece of the larger connectivity puzzle. As Huawei representatives pointed out during the company’s Connect 2022 Summit, the shift toward 5G-Advanced needs to be accompanied by improvements in core, storage, computing, optical, and data communications, to name just a few areas. ETSI just released another white paper focusing on the standards for fiber F5G Evolution, with the idea that more regular enhancements to the fixed network—combined with greater collaboration—will improve the synchronization between wireless and fixed evolutions.

We plan to discuss these topics further in future blogs. For more information about the 5G RAN forecast, please see the latest 5G Report.