With virtual MWC coming to an end, we are sharing some of the RAN related highlights below. To access the entire summary, please contact Daisy@delloro.com.

COVID-19 – It is no longer just about the supply chain

When we updated the 2020 outlook in conjunction with the 4Q19 RAN report, we assessed the potential supply chain risks as a result of COVID-19. At the time, the suppliers were not overly concerned about their abilities to meet 2020 shipments. While this assessment still holds, the overall situation has evolved since we published the report. In addition to any potential supply chain risks, other variables to consider include:

The Massive MIMO business case has changed rather significantly over the past two to three years with the technology now considered to be a foundational building block for mid-band NR deployments. And with Massive MIMO configured 5G NR systems accelerating at a much faster pace than expected in 2019 and the overall installed base now in the millions, it was not perhaps a major surprise that the technology for a second year in a row remained one of the leading RAN related MWC topics (MWC 2019 Massive MIMO blog, see link).

But what was interesting this year was the different focus among some of the leading suppliers with Huawei and ZTE focusing more on their respective bandwidth advantages while Ericsson and Nokia emphasized the performance benefits with their Massive MIMO systems.

Dynamic Spectrum Sharing (DSS) to play a pivotal role in 2020

DSS was a hot topic during vMWC, validating the message we have communicated for some time, namely that the technology will play a pivotal role in upgrading existing low-band LTE sites to NR in the second half of 2020—Verizon recently confirmed it will launch DSS nationwide in 2020. The timing for any operator that is considering DSS will in addition to device availability to some degree depend on their overall 5G strategy – is DSS a 5G logo, an improved experience, or a stepping stone towards something bigger.

As the operators are doing their best to differentiate their overall 5G strategies, some confusion is inevitable. And with T-Mobile publicly suggesting that DSS is not ready for prime time and the technology its current state would impact the overall capacity negatively, the leading vendors took some time to clarify the state and benefits with DSS. But the key point here is that there are only three ways to move from 4G to 5G with existing LTE spectrum (re-farming, static sharing, and DSS). And if we are going to discuss relative performance of DSS, Ericsson rightly pointed out that we need to compare apples-to-apples. 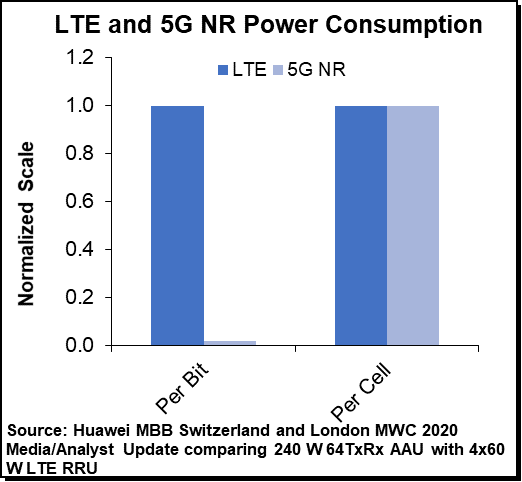 Since there is no shortage of media coverage suggesting 5G cell sites will be significantly more power hungry than 4G cell sites, the vendors have over the past year ramped up the engineering and marketing efforts with their 5G portfolios.

Huawei has on numerous occasions discussed the 25x to 50x (future 100x) power consumption per bit advantage between 5G NR and LTE while acknowledging that the overall NR cell consumption could be slightly higher. And now, partly due to continued channel, carrier, and symbol shutdown advancements, Huawei announced that the total power budget between NR and LTE is comparable when comparing the 64TxRx AAU with the 4×60 W LTE RRU.

There are multiple ongoing RAN virtualization efforts driven both by operators and suppliers with the primary objective of realizing a more flexible architecture with uniform hardware platforms that will optimize TCO and service differentiation for both the known and unknown use cases.

Given the current progress and the overall readiness with both the Open RAN and Non Open RAN virtualization tracks, we anticipate that the benefits with purpose built RAN will continue to outweigh the benefits with Virtual RAN over the near-term.

At the same time, the Open RAN momentum is moving in the right direction as the ecosystem develops, partnerships are forming, suppliers are ramping up investments, and operators are committing and experimenting with trials.

TIP announced a project targeting commercial multi-band radios by 2021 in the $1 K range. Even if the RAN is a relatively small portion of the overall site TCO, this cost structure is clearly compelling and would go a long way offsetting higher baseband compute costs typically associated with general purpose solutions.

For more details about the shift towards virtualized and Open RAN, please see separate blog.