5G Is Propelling RAN to Another Strong Quarter

We just published the 3Q20 RAN report. Preliminary readings indicate that the positive momentum that has characterized the radio access network (RAN) market since the upswing began in the second half of 2018 extended into the third quarter, with surging demand for 5G propelling the RAN market to robust year-over-year growth, validating the message we have communicated now for some time about the disconnect between the underlying economy and the RAN market in this recession.

In this report, we estimate that the overall 2G to 5G RAN market advanced 10% to 20% Y/Y in the third quarter. With the strong showing in the quarter, the RAN market has now advanced on a year-over-year basis in eight out of the last nine quarters, reflecting positive momentum in multiple markets.

The asynchronous nature of the 5G rollouts in the US, reflecting the FCC’s decision to deemphasize the importance of the mid-band spectrum, has not impacted the overall capex envelope in the US market. On the contrary, this spectrum strategy is pushing the US operators to make the best of the cards they were dealt, and optimize how they allocate the capex between capacity and marketing-driven investments. Following three consecutive years of robust growth in the North America region resulting in a revenue surge of 30% to 40% between 2016 and 2019, the North American RAN market remains on track for a fourth  consecutive year of growth. 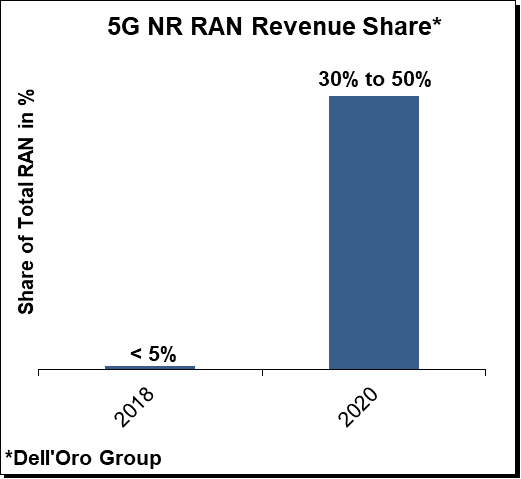 The shift from LTE to 5G NR, low-band and mid-band, continued to accelerate at a torrid pace, with 5G NR revenues more than doubling Y/Y in the first nine months, accounting for 30% to 50% of the RAN market in the quarter. To put this into perspective, it took more than four years for LTE to reach the same revenue share of total RAN.

Initial estimates suggest that vendor rankings remained stable between 2019 and the first three quarters of 2020, while revenue shares were impacted to some degree by the state of the 5G rollouts in China and North America, resulting in share gains for the Chinese suppliers – we estimate that Huawei and ZTE collectively gained approximately 5% points of revenue share between 2019 and 2020 (YTD).

We have adjusted the near-term RAN market outlook upward, to reflect stronger than expected activity in China, Europe, and North America, with total RAN projected to approach $70 B to $80 B for the combined 2020 and 2021 period.

Small cells are expected to continue playing an important role in 2021, approaching 10% to 15% of the overall RAN market. The outlook for mmWave remains favorable, with more than 100 operators investing in the technology. 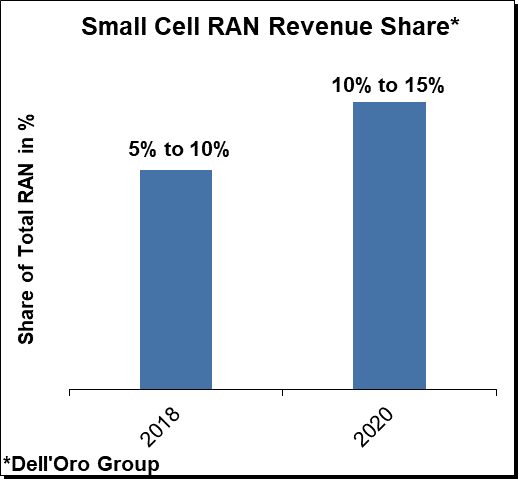 Open and virtual RAN continues to gain momentum, bolstered by Ericsson now formalizing its support with its Cloud-RAN announcement. The uptake remains mixed. Some suppliers are already shipping O-RAN compatible radios. At the same time, the lion share of any RAN swaps is still going to the traditional RAN players, suggesting the technology remains on track but the smaller players also need to ramp up investments to secure larger brownfield wins.