Huawei recently held its annual MBBF Forum. Even though we were not able to attend in person, it was an interesting event. Below we will add some color to five radio access network (RAN) related takeaways including 1) 5G=1+N; 2) Massive MIMO is a massive success; 3) There is more room left in the sub 6 GHz tank; 4) Site simplification will play an increasingly important role; 5) The outlook for vertical 5G activity is improving.

5G = 1+N (One foundational network plus N capabilities on demand)

If there is one thing we can all agree on after these first two years of commercial 5G deployments, it is that 5G means different things to different people.

While there is little disagreement that 5G now initially is just another G, providing operators with a compelling technology and business case to expand their respective mobile broadband networks to address todays use cases, the interpretation about the 5G opportunity tends to become more interesting as we look beyond the smartphone MBB use case. Because even if the narrative has morphed somewhat and the lion share of the capex in this initial wave is addressing what we know today, the long term vision still holds, namely that 5G has the potential to expand the role of connectivity beyond the MBB usage scenario and pave the way for new applications and use cases and expand the wireless based economy.

In order to address both the known and unknown opportunities with extremely diversified service requirements, Huawei is recommending operators build one foundational wide-area mobile broadband network with ubiquitous connectivity. The vision here is resting on the assumption that this foundational network combined with flexible on demand capabilities leveraging various spectrum bands (such as those designed for FDD or Super Uplink) to address diversified 5G service requirements for various people, things, and industries will ultimately enable the operators to provide optimized solutions from a technology and business case perspective for the various 5G opportunities.

For a technology that was initially viewed as being mostly a fit for hotspot scenarios, Massive MIMO has come a long way, accelerating at a much broader and faster pace than initially expected. Preliminary estimates suggest Massive MIMO RAN investments remain on track to surpass $10 B for the full-year 2020, up nearly 20-fold in just two years. Cumulative Massive MIMO transceiver shipments are projected to approach 0.1 B to 0.2 B in 2020. 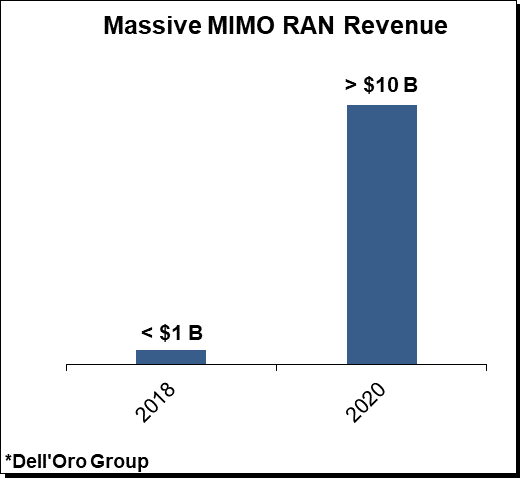 Not surprisingly, Massive MIMO based technologies are powering the vast majority of the 100+ commercial 5G networks. And more than 75% of the projected 0.2 B+ 5G subscriptions by year-end 2020 will likely utilize the upper mid-band. 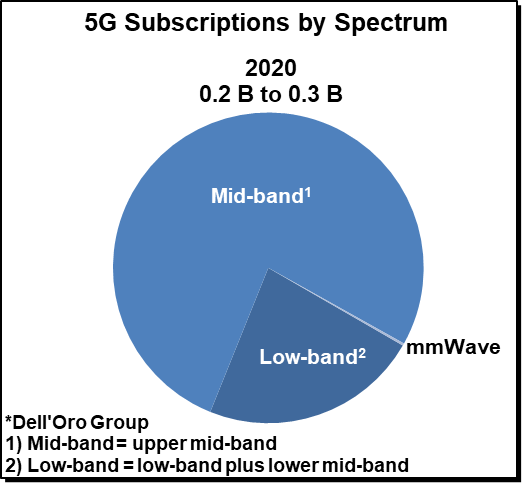 While Massive MIMO has surprised on the upside when it comes to form factor, weight, performance, cost, and price, one of the key takeaways from the event was that this technology has more room to advance and will continue to play an extremely important role going forward. 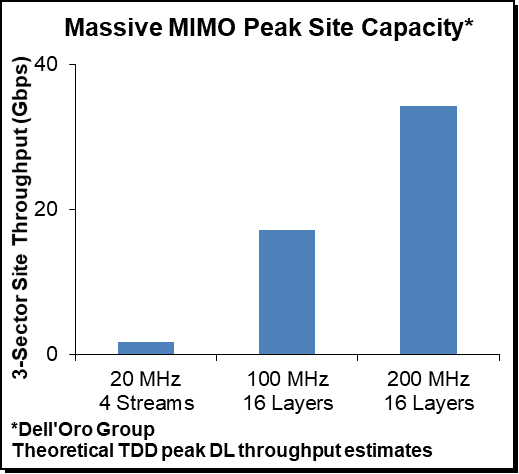 During the event, Huawei discussed the prospects of another potential 2x of cell capacity using its Adaptive High Resolution (AHR) algorithm to enable a premium experience in locations with high user density and interference.

There is indeed something to be excited about. In this scenario, theoretical 3-sector peak capacity would approach 17.1 Gbps if used in conjunction with the AHR (100 MHz of BW, 8 users). This is consistent with Ericsson and T-Mobile’s recent 16-layer MU-MIMO demo with peak cell throughputs of 5.6 Gbps.

More importantly, Huawei also shared data from real deployments, showing that these types of algorithms can improve the performance outside the lab in non-ideal conditions producing around 3.8 Gbps of cell capacity in 100 MHz of bandwidth.

Huawei also signaled some optimism about the FDD Massive MIMO opportunity, announcing the FDD-based 32T32R system, primarily targeting operators with limited upper mid-band spectrum. As a reminder, FDD-based Massive MIMO systems are not new and this concept has been around for some time. However, FDD-based Massive MIMO technologies have not gained the same mass-market acceptance as TDD-based solutions. In addition to the relative efficiency gap between FDD and TDD as a result of leveraging channel reciprocity in TDD systems, FDD-based solutions typically also operate in a lower spectrum band, increasing the physical size of the antennas. 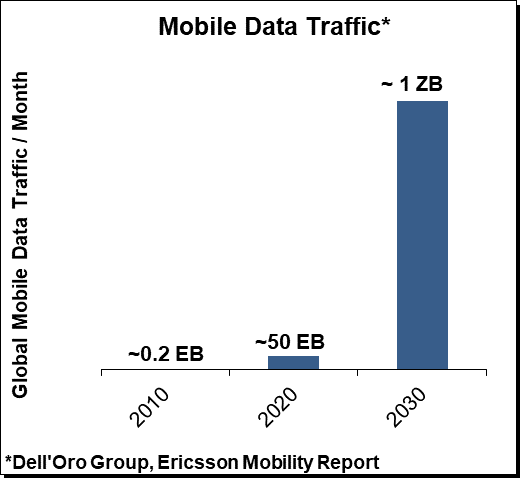 Measuring 0.5 meters in width and weighing around 50 kg, it remains somewhat unclear at this juncture how operators will prioritize FDD-based Massive MIMO in the broader long-term capacity roadmap. Even though preliminary Huawei tests suggest 32T32R can deliver 3x to 4x of capacity growth relative to 4T4R, we expect that FDD Massive MIMO adoption will remain limited for some time and likely be a stronger candidate for mass-market acceptance once operators exhaust the upper mid-band spectrum. At that point, operators can assess what the best tool in the toolkit might be to deliver the next most economical and sizeable capacity boost – FDD Massive MIMO, 6425-7025 MHz, or mmWave.

One of the reasons this shift from passive 4G to active antenna based 5G has accelerated at a much faster pace than initially expected is the fact that operators can for the most part leverage their existing macro grid, which has been a major benefit both from a time-to-market and TCO perspective as it reduces the need to add more outdoor sites to realize 5G NR coverage that is equivalent to the outdoor sub 3 GHz LTE coverage. This model of adding new technologies to the existing sites at a faster pace than legacy technologies are sunset will naturally complicate the situation as the sites are becoming increasingly crowded. Although suppliers have invested heavily to address some of the shortcomings at the site with more power-efficient systems and smaller form factors to manage the challenges with adding both Massive MIMO and non-Massive MIMO configured systems, there is more work to be done to support the various frequency and passive/active antenna systems.

During the MBBF event, Huawei announced various RAN enhancements as part of its continuous journey to simplify site deployments including the Blade AAU Pro, which combines a 64T64R 200 MHz Massive MIMO antenna with passive sub 3 GHz band support. As a reminder, Ericsson has its Hybrid AIR antenna system and Nokia and CommScope recently announced they are working on a new hybrid passive/active antenna solution addressing similar site challenges. Huawei is claiming this is the first 64T64R and full sub 3 GHz hybrid unit.

In addition to the increased focus on form factor, power consumption, and radio integration, this on-going shift towards multi-technology sites addressing legacy technologies and all the various 5G solutions targeting a wider scope of use cases spanning across potentially multiple industries will also complicate the overall site simplification objective from an operations & maintenance (O&M) perspective. In order for the operators to maintain the performance for 2G-5G consumer networks and simultaneously target capabilities for vertical opportunities while balancing the user experience and optimizing the use of the all the resources to ensure the right KPIs are delivered without breaking the energy or opex budgets, increasing the reliance on more intelligent solutions will be paramount. During the event, Huawei reiterated the importance of introducing more intelligence to simplify the networks and manage the increased complexity without growing opex. AI-assisted autonomous driving of networks will play an increasingly important role to address the challenges O&M poses in the 5G era.

The outlook for vertical 5G is improving

5G eMBB (and FWA) is driving the lion share of the current 5G RAN capex (>99%), still, one of the more exciting takeaways from this event was the progress beyond the eMBB/FWA use cases. At a high level, it is still very early days for private wireless, which is currently dominated by LTE. The private 5G market is even more nascent but with standards ready, 5G and private spectrum becoming available, an ecosystem that is accelerating, and signs of activity picking up pace as new use cases are emerging, there is some optimism that private wireless and 5G NR 2B capex can become more meaningful in the next couple of years.

Huawei’s 2B segmentation is consistent with how the broader industry is now characterizing this market opportunity, consisting of three high-level tiers including the Wide Area Public Network, Wide Area Slicing Network, and Local Area Private Network. Some suppliers are also considering splitting the Wide Area segment into two tiers to capture the various coverage ranges.

What makes the private and 2B markets so exciting is that the opportunities are so vast for both the operators and the suppliers. At the same time, private wireless is different than the traditional public wireless market not only from a technology and standards perspective but also from an ecosystem, go-to-market, and deployment perspective.

Revenues are small relative to overall 5G investments but activity is on the rise. Huawei is engaged in thousands of private 5G projects across China focusing on smart factory, smart port, smart mining, smart utilities, and smart healthcare — consistent with its four-dimensional strategy to move from demo to deployment assessing the opportunity and readiness from a business, technology, standard, and ecosystem perspective. Judging by the proof of concept data shared at this event and progress communicated by other RAN suppliers, the smart factory appears to be emerging as a common theme.

As we have discussed in the 5-year forecasts, it will take time for these non-traditional opportunities to offset declining macro coverage capex post the peak MBB rollout phase. Nonetheless, the progress is promising, bolstering the thesis that the aggregate upside of these smaller opportunities could provide some cushion in the outer part of the forecast period.

The event was also a good reminder that the smaller Open RAN suppliers need to ramp investments to ensure they can deliver simplified and energy-efficient passive/active/hybrid solutions in a competitive form factor that maximizes the use of the sub 6 GHz spectrum.