We just published the latest edition of our 5-year forecast for the Network and Security and Data Center Appliance (NSDCA) Market that spans Firewalls, Secure Web Gateways, Email Security, IDS/IPS, Application Delivery Controllers, and Web Application Firewalls. A year ago, we debated the effects of the US and China relationship and Brexit on the market, but this year all attention is on the COVID-19 pandemic. The pandemic is reverberating through the market with both near-term and long-term consequences.

Near-term, we see overall NSDCA market growth muted that will only attenuate as societies turn the corner on the pandemic. We forecast the market will post meager growth of just 2% year-over-year (Y/Y) in 2020. Historically, the total market has been averaging 7% to 9% Y/Y growth. Fortunately, we believe the market will begin reverting to more robust growth in the latter half of 2021 as vaccination against COVID-19 ramps up.

We project post-pandemic growth to be stronger than what we predicted pre-pandemic in January 2020 and rise from $17.6B in 2020 to $28.8 B in 2025, representing a 10% five-year compound annual growth rate. The key difference from a year ago is the pandemic’s expected long-term effects on how businesses operate:

Though a rising tide lifts all boats, in our report, we dig into the details on how cloud-friendly technologies will rise faster than on-premise technologies post-pandemic.  For example, the Firewall segment, representing over 50% of the overall market, is not expected to match our pre-pandemic forecast. We do expect the Firewall segment to rebound, but not as strong as other segments. The Firewall segment has traditionally been biased towards physical appliances and on-premise corporate deployments.  We see physical appliances playing a shrinking role in the market as enterprises move to virtual and software-as-a-service embodiments.

Global spending on broadband access equipment and CPE is expected to drop only 2% in 2020, a significant improvement from our July 2020 forecast, which anticipated spending dropping by 7% in 2020. The combination of significant residential subscriber growth and increased capacity utilization rates noted by global broadband providers nearly offset the negative impacts of trade tussles, component shortages, and labor limitations.

In the first half of 2020, we heard from countless service providers that their projected capacity utilization rates for the entire year were reached by March or April. A second surge in consumption in the fall, driven by children returning back to school and attempts at re-opening economies forced many operators to add even more capacity. With much of the world still dealing with the impacts of the COVID-19 pandemic and with remote work and online education continuing well into 2021, we see no slowdown in broadband capacity utilization, forcing service providers to once again balance accommodating traffic growth with managing overall spending. Continuing RAN investments will force service providers to spend judiciously on their broadband networks. In certain cases, this will mean delaying longer-term strategic projects and focusing on addressing immediate capacity upgrades and onboarding a higher-than-average volume of new subscribers.

Our five-year CAGR for PON equipment has been increased to 3% from just under 1%. China, which has historically accounted for anywhere from 65-80% of total PON spending, has peaked in terms of total ONT units consumed on an annual basis. The Chinese FTTH market has matured, with broadband penetration in the country reportedly nearing 80%. Though subscriber growth is slowing, there is still a tremendous installed base of subscribers that will continue to require new ONTs.

Although China’s ONT volumes are coming down from the peak years of 2017 and 2018, additional growth is expected from the rest of the world—particularly North America and Western Europe. In North America, the FCC’s $20B RDOF (Rural Digital Opportunity Fund) program will help transition a significant number of rural areas to fiber over the next 5-7 years. In Western Europe, major operators including Orange, DT, BT OpenReach, and Proximus are all expanding their fiber rollouts and even moving quickly to XGS-PON for symmetric 10 G services.

Finally in Asia, India, Indonesia, and Malaysia, along with a 10 G upgrade cycle in Japan and South Korea should also help sustain the market.

The glut of DOCSIS channel capacity that helped push down cable equipment revenue in 2018 and 2019 was actually beneficial to operators in 2020 as they were able to address significant increases in both upstream and downstream traffic during the pandemic with minimal increases in spending. In most cases, cable operators used the software tools available as part of DOCSIS 3.1 to ensure adequate bandwidth for all subscribers. In other cases, operators purchased additional DOCSIS licenses as part of accelerated node split programs to address systems with the greatest need.

Regardless, after two years of under-investing in infrastructure, the overall cable infrastructure market will see a steady increase in revenue throughout our forecast period, as mid- and high-split projects in North America and Western Europe, designed to increase upstream capacity, are accelerated. Investments in outside plant equipment, particularly new amplifiers and taps, will also continue as operators begin the multi-year process of preparing their networks for DOCSIS 4.0 and its ability to enable extended spectrum DOCSIS (ESD), low-latency DOCSIS, and full-duplex DOCSIS (FDD).

Although we continue to be concerned with the high level of uncertainties that exist due to the COVID-19 pandemic, we believe that the Optical Transport market will maintain its positive momentum for the next five years. This long term outlook is based, fundamentally, on the belief that bandwidth demand will continue to increase for many more years in the future as it has for the past decade—one that included the start of a pandemic.

But even with these market challenges, we are optimistic about the future of Optical Transport and believe that the market for optical gear will rise for many more years. In this latest January 2021 publication, we are forecasting that the cumulative Optical Transport market revenue will be nearly $85 billion for the years that include 2021 through 2025.

Our growth projections are driven by the anticipated need for WDM systems in both metro and long-haul applications, which combined is expected to comprise nearly 98 percent of the total Optical Transport equipment market.

Within the WDM market, we expect the continuous drive to higher wavelength speeds to occur. Hence, while 100 Gbps coherent wavelengths contributed the majority of revenue before, we forecast the largest contributor will be 200 Gbps in the near term period, and then 400 Gbps in the outer forecast period. In all, we are forecasting 200+ Gbps wavelength shipments to grow at a five-year CAGR of 30 percent.

The following are key takeaways from the newly released report:

With the overall RAN market now growing at the fastest pace in nearly ten years and on track to approach revenue levels not seen since the Chinese operators rolled out 3G, one of the fundamental questions is simply whether there is more room to grow with this elevated baseline, keeping in mind the historically tight coupling between RAN revenue and wireless capital intensity. And if so—where will this growth come from?

We believe that there is room for expansion over the near term as the early adopters continue to roll out 5G at an extraordinary pace. The shift from 4G to 5G is accelerating at a torrid pace and much faster than expected. This is not because operators expect to raise ARPU or because they are anticipating significant near-term revenue upside from new applications. Instead, the main driver is on the supply side, and the ability of the operators to reduce cost-per-bit and to differentiate on the packaging with larger data plans. 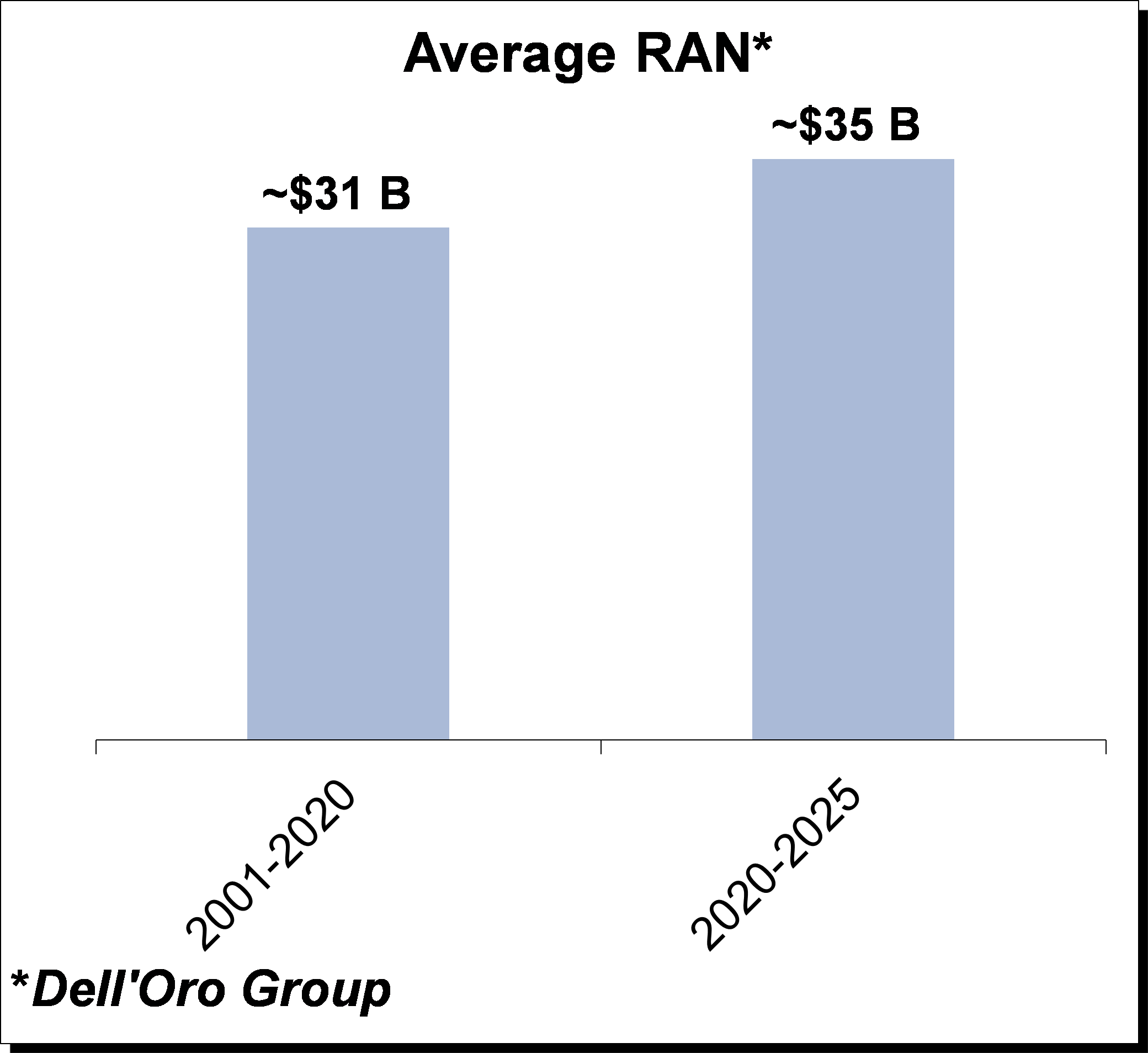 After the RAN market reaches a new all-time high, we project that total RAN revenues will give up some gains in the post-peak MBB rollout phase. At the same time, we are anticipating a somewhat less severe pullback relative to the contractions following the 3G and 4G peaks in China.

While some deviation in the capital intensity ratio is expected in the peak coverage rollout phase, this forecast, with the post-peak pullback projected to approach two-thirds of previous declines, rests heavily on the assumption that the aggregate upside of these smaller non-traditional growth opportunities driven by new fixed and enterprise capex will curb the downside somewhat in the outer part of the forecast.

The main reason we remain excited about the opportunities ahead, even if we are still operating in uncharted economic territories, is the fact that the somewhat tepid high-level outlook is masked by all the ongoing parallel efforts taking place in addition to the shift from 4G to 5G, opening up opportunities for both the incumbents and new entrants.

Other takeaways from the January 2021 5-Year RAN Forecast include: