The Massive MIMO RAN market – which includes baseband and radio revenues for large-scale antenna systems featuring > 8T8R sub 6 GHz LTE and NR radio configurations – ended the year on a high note, with full-year Massive MIMO RAN revenues more than doubling in 2020 propelling global transceiver shipments to approach the 0.1 B to 0.2 B range.

Not surprisingly, Massive MIMO-based technologies are power the vast majority of the 100+ commercial 5G networks. And more than 75% of the 0.2 B+ 5G subscriptions by year-end 2020 utilized the upper mid-band. 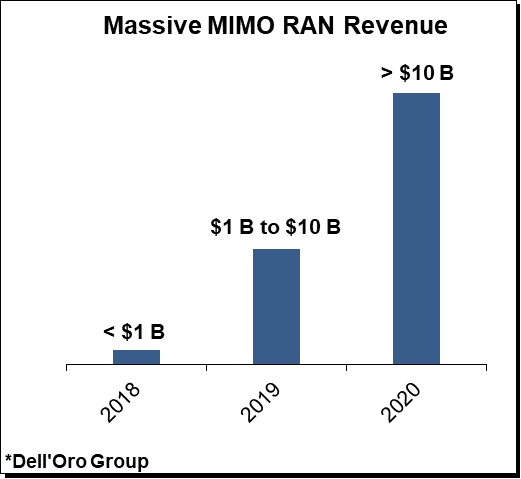 Helping to explain this output acceleration is the exceptionally robust 5G Massive MIMO growth in the Asia Pacific (APAC) regions, driven by large-scale deployments in China, elevated investments in Korea, and improving trends in Japan. And even though narrow-band NR has been the main focus for the leading US operators, T-Mobile’s wide-band 5G NR network covered roughly a third of the population by the end of 2020.

Even with the elevated baseline, we believe market conditions remain favorable. Global Massive MIMO growth is expected to tick up at a double-digit pace in 2021, underpinned by continued investments in the leading 5G markets and improving Massive MIMO coverage with the early majority segment – the GSA has identified 220 operators in 63 countries/territories with the right spectrum assets to deploy LTE or NR based Massive MIMO systems.

And equally important, the vendors continue to innovate and come up with incremental advances, improving the form factor, weight, performance, cost, and price. Just this past week, Samsung announced enhancements that will improve the Massive MIMO throughput by up to 30%. And Ericsson’s latest AIR 6419 64T64R radio weighs just 20 kg (200 MHz BW, 320 W). It was just two years ago at MWC 2019 in Barcelona when the same product configurations were in the ~40 kg range. Huawei also announced a new Massive MIMO radio weighing only 19 kg, down from 25 kg just last year, though it is not entirely clear from the announcement if we are comparing apples-to-apples with the Ericsson solution. Regardless, the suppliers clearly understand the role that Massive MIMO is already playing and will continue to play to optimize the overall TCO per capacity.

In short, 2020 was a phenomenal year for Massive MIMO, and we remain excited about the short-term and near-term prospects and will continue to monitor the market and vendor dynamics. For more information about our Massive MIMO coverage, please see the quarterly RAN and 5-Year Forecast RAN reports.

In our latest forecast published in January 2021, revenue for the worldwide Ethernet controller and adapter market is projected to increase at a 3% compound annual growth rate (CAGR) from 2020 to 2025 to $2.7 billion.

This market is characterized by speed transitions. We project during our forecast horizon, the majority of the Cloud and Enterprise server market will upgrade port speeds from 10 Gbps to 25 Gbps, with a growth of 25 Gbps leveling by 2025. Newer technologies, Smart NICs and 100 Gbps Ethernet, and to a lesser extent, 50 Gbps, with CAGR growing strong double-digits by 2025, fueling market growth opportunities.

We believe that these advances in server network connectivity will enable the major Cloud service providers to continue to scale their networks, and drive the adoption of bandwidth-hungry AI applications.

To learn more about the Ethernet Controller and Adapter market, or if you need to access the full report, please contact us at dgsales@delloro.com.

Dell’Oro Group just published an updated forecast for the enterprise Wireless LAN (WLAN) market, and expects demand to be robust over the next five years, growing to almost $9 B, as Wi-Fi becomes the default connectivity option for users and devices. In spite of a severe worldwide economic downturn, the enterprise WLAN market has proven remarkably resilient in 2020—revenue is on track to decline modestly supported by remarkable government stimulus that became available in 3Q20. We estimate government funding to grow to a disproportionate portion in 2021, which means the magnitude and duration of funding could move the market significantly.

One of the big winners in 2020 was cloud-managed WLAN: adoption of cloud-managed Wi-Fi access points jumped by 6 points in 2020 as the pandemic triggered interest in remote management capabilities, given the difficulty of visiting locations in person. However, going forward, we don’t expect this surge to continue, rather we expect adoption to grow at a more moderate pace as businesses balance the need to manage a distributed network with the desire to maintain control over their data. Issues such as high priced egress fees, and disputes over who owns the data have emerged and need to be resolved.

We were surprised to learn enterprise class Wi-Fi 6E access points are planned for the summer of 2021, as most vendors we spoke with were planning six-to-nine months later. Another surprise was the first products will be 2×2 rather than 4×4. Lower-end products spearheading a technology transition is different from previous technology introductions, and has a huge implication on market penetration, and moving the market. The obvious first impact could be users delaying purchases as they wait for 6E products from their favorite supplier, with the most notable pause coming from the high-end and high portion of the midrange market. We forecast 6E to fuel the market growth through the forecast horizon.

Our discussions with system integrators indicate a notable increase in deployments of competitive wireless technologies (5G, private cellular, Broadband Fixed Wireless) in 2020, particularly from schools and municipalities connecting constituents during the pandemic. We believe the impact on the WLAN market will be limited, as Wi-Fi is not a good fit for these types of deployments due to range, and coverage requirements. There is an opportunity for vendors to build network management systems that bring these different networking technologies together under one roof.

In sum, we address factors suppressing as well as accelerating the WLAN market in our forecast report. One of the main drivers of traffic and network upgrades—the growth engine—is people returning to work.

Campus switches are used for the purpose of connecting users and devices to the corporate Local Area Network (LAN). With the Work from Home or from Anywhere predicted to become a permanent aspect of the future of work, one of the fundamental questions is whether there is room for growth in the campus switch market. And if so- where will this growth come from?

We just published the latest edition of our 5-year forecast for the campus switch market. In the report, we discuss some of the negative impact from the pandemic such as the following:

Despite the potential downside risk from COVID-19, we expect that the pandemic will also have some upside impact that will drive the market recovery, as detailed below:

Any other impact from the pandemic on the campus switch market?

The pandemic is also expected to accelerate the adoption of Cloud-managed switches to accommodate the distributed workforce. Additionally, our interviews with end-users, system integrators, and VARs revealed an increased interest in Network as a Service (NaaS) during the pandemic, an interest that is expected to persist even after the pandemic ends.

If you need to access the full report to obtain revenue, units, pricing, relevant segmentation including regions and vertical markets, etc., please contact us at dgsales@delloro.com.

The Service Provider Router market—which includes Core, Edge, and Aggregation segments—held up reasonably well in 2020 despite the macroeconomic turmoil caused by the COVID-19 pandemic. Large-scale network operators, whether they be telecom, cable MSO, or cloud service providers, pulled back on some infrastructure investments, but on the whole, continued to add capacity to their networks to meet the expanding traffic loads. The worldwide SP Router market declined just one percent in 2020.

In our new 5-year forecast report, we are predicting that the worldwide SP Router market will resume growth in 2021 and continue to expand annually through 2025. To be clear, the SP Router market is a mature one, and our projected compounded annual growth rate (CAGR) in the low single-digits reflects the state of the market. Nonetheless, there are some clear opportunities for growth with emerging technologies and the evolution of network architectures. Our forecast highlights the emergence of 400 Gbps and evolution of 5G transport infrastructures:

Demand for 400 Gbps capable routers will start to ramp in 2021 and become the growth engine for high capacity network expansion for the foreseeable future. Adoption will be mainly for core network use cases, but with the need for high capacity IP transport being pushed to the edge of networks, 400 Gbps will see broader adoption than 100 Gbps in its initial stages.

Coinciding with the emergence of 400 Gbps routing technologies are disaggregated router solutions in which the network operating system software is sold independently from the hardware, and the availability of 400ZR optical modules with a potential reach of 120 kilometers. These technologies bring new dynamics to the market that potentially alter the competitive landscape.

The global transition to 5G radio access networks (RAN) technologies will generate long-term demand for IP transport network upgrades. Higher capacity products will be an important aspect of the upgrade cycle, but service providers will require entirely new levels of functionality, scalability, and operational efficiencies to deliver the high-value 5G services they envision. What this means to that IP and software functionality will be distributed even more broadly across the network infrastructure.