The quickening pace of technological innovation across a growing number of industries will drive continued growth in the semiconductor industry. In the communications and consumer electronics verticals, the global deployment of 5G mobile and fiber-based broadband networks along with the phones and other devices used to access those networks and services, will be significant drivers of new semiconductor designs. Additionally, the proliferation of AI (Artificial Intelligence) and machine learning throughout service provider, cloud hyperscaler, enterprise, and industrial networks, will also drive demand for chips with embedded processing capabilities.

From a regional perspective, the Asia-Pacific region will continue to provide the largest source of revenue for the overall semiconductor industry, as China will remain the world’s largest importer and purchaser of components. China is estimated to purchase roughly 40% of worldwide semiconductor shipments, with an estimated 80% of semiconductors used in communications and consumer electronics product designs estimated to be imported from abroad. However, the domestic Chinese semiconductor manufacturing industry is estimated to be capable of meeting at most 30% of total demand.

This large discrepancy has resulted in a massive trade and technology deficit, which the Chinese Government is attempting to balance through a combination of subsidization, private equity, and the lowering of barriers to entry for foreign participants. The primary goal of these efforts is to advance the overall semiconductor industry to increase self-reliance and reduce the uncertainty that has arisen due to ongoing trade tensions with the US and other Western countries.

In 2014, China’s State Council published the “National Integrated Circuit Industry Development Guidelines,” which proposed to set up a special industry investment fund to back domestic semiconductor startups, particularly around 14nm finFETs, memory, and packaging. The “Big Fund,” as it is called, has gone through two rounds of funding, most recently raising around $29 billion in 2019.

The coordinated efforts have resulted in some notable advances, including SMIC’s (Semiconductor Manufacturing International Corporation) capability of shipping 14nm finFETs with 7nm in R&D. This is an advance over just one year ago, when SMIC’s most advanced process was a 28nm planar technology. Additionally, China will spin up its first 28nm lithography machine in either 2021 or 2022, which will help Chinese companies manufacture advanced 28nm chips, possibly within 1-2 years. That would be a significant step forward for the domestic industry and provide a foundation for more domestic foundries to begin more advanced design and manufacturing for 14nm and 7nm-based processors.

Ramping up 28nm chip production is an important milestone for the Chinese industry, as there will remain a large market for trailing-edge chips as AI features and functionality are embedded in more consumer electronics, automobiles, robots, smart electric meters, smart traffic lights, etc. The AI chips used in these applications will require more leading-edge chipset design, as opposed to leading-edge fabrication. Thus, the short-term goal of achieving scale at 28nm is a very meaningful step in the long process of developing a more complete, domestic IC ecosystem.

SMIC is also on the verge of building out a $7.6 billion plant in Beijing that will produce 12-inch wafers with the intention of fabricating 28nm chips. This factory, along with the expected buildout of other plants, could help to solve one of the Chinese industry’s biggest hurdles to the global competition: production capacity.

Additionally, SMIC and other manufacturers are also in the process of adding both foreign and domestic technical talent with the necessary years of experience to design and manufacture high-quality chips with consistent performance at price points that are competitive. These efforts will ultimately benefit the overall industry and supply chain, though the results will take time. Currently, SMIC’s top wafer production is at 14nm, while others are at 7nm and already pursuing 5nm and 3nm processes. Though improving and evolving its production knowledge and facilities are important goals, the company must still balance being the primary supplier of chips that don’t necessarily require the latest nodes. That balance is just as important to the overall growth of the semiconductor industry in China as is the ultimate evolution to 14nm and 7nm production capabilities.

When it comes to AI chips, specifically—including GPUs (Graphics Processing Units) and FPGAs (Field Programmable Gate Arrays)—Chinese companies are still expanding their knowledge and capabilities to compete effectively in what is expected to be a massive market over the next decade. These are the chips that are the most heavily in-demand for communications networks, especially as these networks are transformed and processing capabilities are distributed to the edge of the network and away from centralized data centers and central offices. The result will be smaller platforms supporting and processing the data traffic coming from billions of connected devices.

Currently, Chinese FPGA makers and network equipment providers license cores from Western companies, such as Intel and ARM. These companies also rely on EDA (Electronic Design Automation) software from Western companies, such as Cadence. Despite recent trade tensions, Chinese firms need these partnerships to continue to deliver their products to the market. These Western vendors also depend heavily on the China market for their revenues.

Although China is investing heavily in building out its semiconductor capacity, the innovation capacity advantage enjoyed by US and Western countries means that Chinese companies will continue to need access to US and Western technology for core components, software, design, and systems integration. For Western companies, this means that new market opportunities have opened up for them, provided that concerns around intellectual property, forced technology transfer, and cybersecurity are understood and that these Western firms continue to remain ahead on the innovation curve.

The opportunities for cooperation are there but will require effort to ensure both sides have their concerns around competition and information security are acknowledged and addressed. There is no question that Chinese firms will continue to move down a path towards more self-sufficiency when it comes to the design and manufacturing of leading-edge semiconductors. The investments that have already been made and will continue to be made by both existing semiconductor companies, as well as government and private investment, will ultimately result in a more self-sufficient ecosystem in China. It will take a combination of industry maturity, trial, and error, along with a focus on mass production and scale. Given the size of the investments being made coupled with geopolitical uncertainty that is accelerating the drive towards self-sufficiency, the Chinese semiconductor ecosystem could potentially close the gap faster than expected.

Open and Virtual RAN continues to gain momentum, bolstered by Ericsson now formalizing its support with its Cloud-RAN announcement. The uptake remains mixed. In this blog we will discuss three key takeaways for the 3Q20 quarter including:

1) The primary objective of Open RAN is to address market concentration and vendor lock-in;

2) Open RAN revenues are trending ahead of schedule;

3) Not all Open RAN is disruptive.

First, when it comes to the broader movement behind Open RAN, the leading drivers have not changed since we published the Open RAN Forecast this August. Addressing vendor lock-in and market concentration remain the leading drivers behind the Open RAN movement. Initial readings suggest that the overall RAN market concentration levels as measured by the Herfindahl-Hirschman Index (HHI) increased around 10% between 2010 and 1Q20-3Q20, underpinning projections that these trends will not reverse anytime soon with the current RAN model. 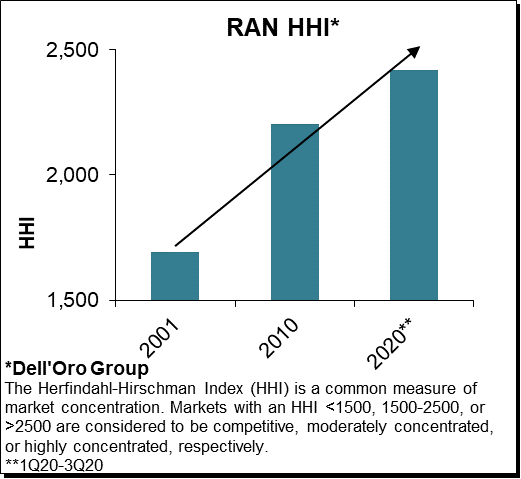 Preliminary estimates suggest Open RAN revenues – including radio, baseband, and software – are coming in at a slightly faster pace than initially expected, reflecting positive developments in the Asia Pacific region. We have adjusted the 2020 outlook upward from ~$0.2 B to ~$0.3 B.

Even though we are in the middle of updating the long-term projections, at this point we just want to clarify that the stronger than expected short-term acceleration does not necessarily translate to faster or slower brownfield adoption beyond 2020.

The results are mixed. While Dish is running into delays in the US market, Rakuten is moving forward at a rapid pace in Japan deploying a variety of both sub 6 GHz and mmWave RAN systems. In addition, some of the Japanese suppliers are reporting that the lion share of their radio shipments are already O-RAN compatible.

The last point we want to make is that not all Open RAN is the same. There is no shortage of ways to segment the Open RAN market – at a highly simplified level, we envision there at least 14 ways to think of the Open RAN opportunity. And while revenue remains a fundamental metric to determine the overall market adoption, it will be particularly interesting to pay attention to the RAN supplier segmentation. This will be important to assess if Open RAN is also disruptive. Because at the end of the day, Open RAN will likely not be considered a complete success story even if Open RAN comprises 100% of the total RAN market but the HHI is still hovering around 2500. 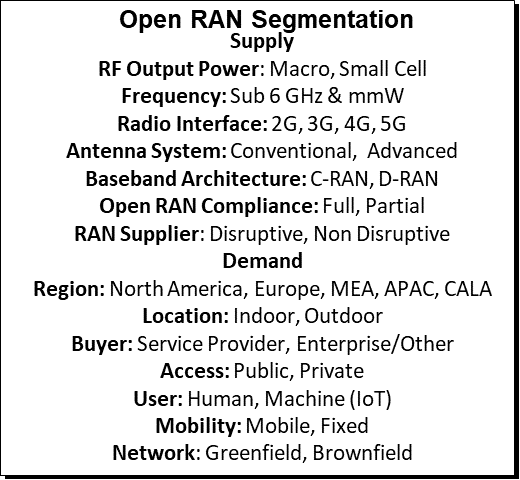 So on the one hand, we estimate total Open RAN revenues are tracking ahead of schedule. On the other hand, the lion share of any “security” related RAN swaps are still going to the traditional RAN players, suggesting the technology for basic radio systems remains on track but the smaller players also need to ramp up investments rapidly to get ready for prime time and secure larger brownfield wins.

The analysis contained in these reports suggests revenue rankings remained stable between 2019 and 1Q20-3Q20, with Huawei, Nokia, Ericsson, ZTE, Cisco, Ciena, and Samsung ranked as the top seven suppliers, accounting for more than 80% of the total market. At the same time, revenue shares continued to be impacted by the state of the 5G rollouts in highly concentrated markets. 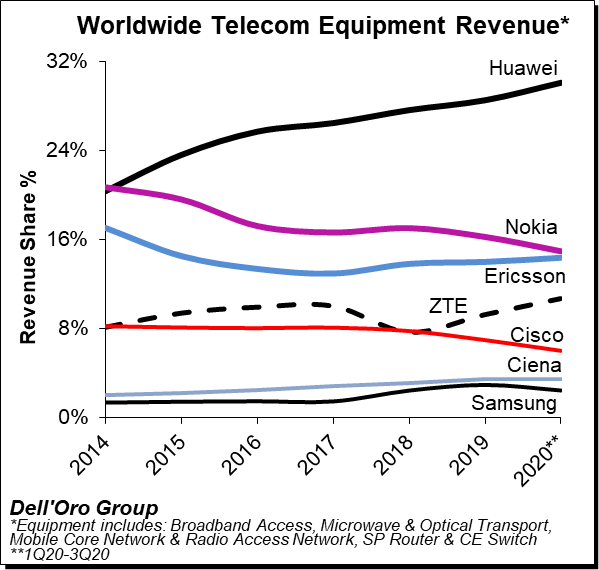 We estimate the following revenue shares for 2019 and the 1Q20-3Q20 period for the top seven suppliers:

Additional key takeaways from the 3Q20 reporting period include: 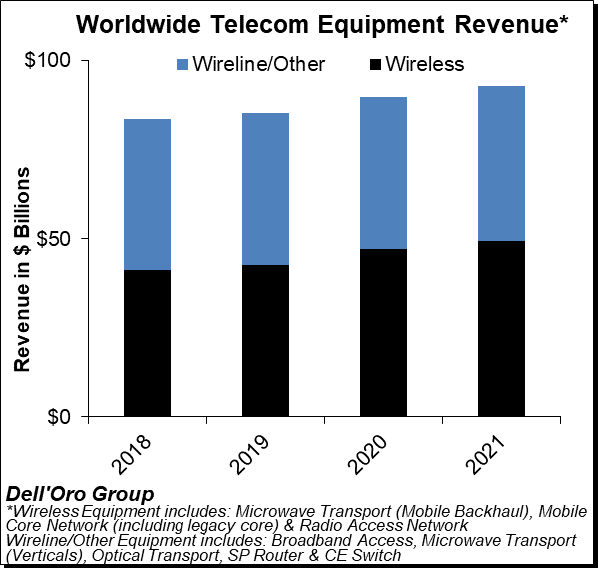